Home » Uncategorized » BBQ in the Winter?

Yes… that’s right. We had BBQ for dinner! Not the traditional kind, but Korean BBQ. Specifically, I prepared kalbi.

Kalbi (or galbi) is a Korean dish made from beef short ribs, and sometimes pork ribs. Galbi literally means “rib” in Korean. It can be seasoned or unseasoned, and if seasoned variety, the ribs are marinated in a sauce made from fruit juice (usually Asian pear juice), rice wine, soy sauce, garlic, sesame oil and sugar. Most recipes contain these basic ingredients, although many variations exist, including clear marinades and spicier marinades. 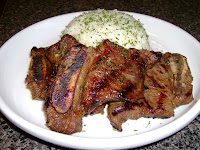 For tonight, I decided to marinate the beef short ribs in soy sauce, rice vinegar, minced garlic, sesame oil, sugar and black pepper. I didn’t take any specific measurements for each of those ingredients, but you could try the “little bit of this, little bit of that” method.

In the bitter cold winds of Chicago, we grill in the winter using our panini press at our house… since we don’t believe in unitaskers! It came out succulent and perfectly seared. With the kalbi, I made sushi rice, seasoned with rice vinegar and a touch of sugar. Overall, our dinner was the next best thing to going to a Korean BBQ restaurant!