Every first Saturday of the month, the Un-Gourmet International Cooking Club gets together to create an amazing pot luck dinner highlighting various cuisines around the world. I’ve been a part of this talented group for over a year and it’s steadily growing. We’ve even been featured in a local magazine, Time Out Chicago! Tonight we feasted on a table full of HUNGARIAN dishes.

Hungarian food is known for its exotic, tasty and spicy food and delicious wine. What is different about Hungarian cooking? In general, the preference is for rich and spicy sauces, stews and sweets over rather “drier” dishes. Common ingredient staples found in the cuisine include pepper, pork, fresh green peppers & tomatoes, sour cream and sweet paprika.

For the pot luck dinner, I brought in Hungarian Style Spinach (Magyaros Spenotfozelek):

— Melt butter in a small saucepan over low heat with the garlic. Saute for a minute, but do not let it burn.
— Add the flour to the butter/garlic mixture to make a roux.
— Add salt, pepper and heat until mixture bubbles, stirring constantly. Remove from heat.
— Gradually add cream or milk; return to heat and stir until mixture is smooth & thickened.
— Add spinach to sauce and serve. Serves 4 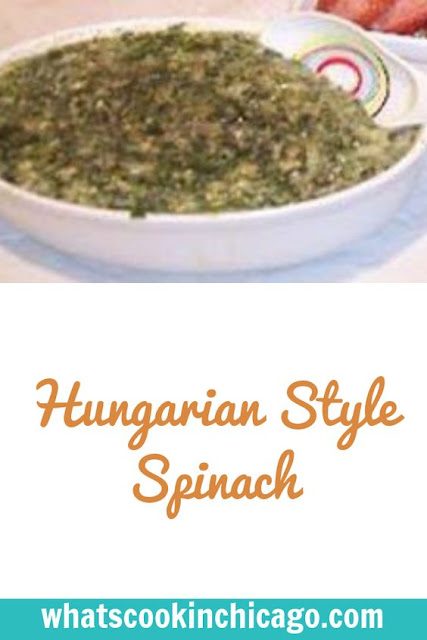 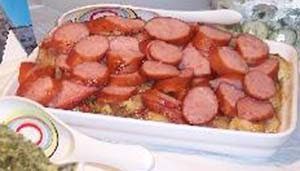 — Cook potatoes in boiling water. Peel & cut in slices. Place in mixing bowl.
— Dice & fry bacon until almost crisp. Add to mixing bowl.
— Saute diced onion in bacon fat and add to mixing bowl.
— In remaining bacon fat, add the flour and cook until smooth and bubbly. Add a touch of butter if there is not enough bacon fat.
— When roux is formed, add vinegar, sugar, salt and water to make a medium sauce. Bring to a boil and cook until thickened.
— Pour sauce over ingredients in mixing bowl, toss and mix to combine.
— Add salt to taste if desired. Top with sliced cooked sausage. Serves 4.