Well I’m on a healthy kick and tonight I finally made a recipe using spaghetti squash! It’s a new favorite of mine and definitely a healthy alternative to standard pasta.

Averaging from 4 to 8 pounds, the cylinder shaped spaghetti squash is generally available year-round with a peak season from early fall through winter. While a true spaghetti squash is pale ivory to pale yellow in color, in the early 1990’s, an orange spaghetti squash, known as “Orangetti” was developed and this is what is frequently found in today’s supermarkets. Higher in beta carotene, the orange variety is also bit sweeter than its paler counterpart, although both have a mild flavor that is easily enhanced by the food served with or on it. A dieter’s dream, a four-ounce serving of spaghetti squash has only 37 calories! 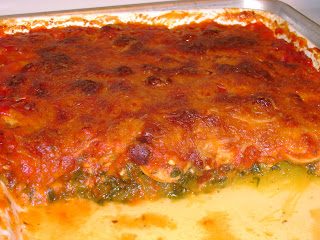 Here is the recipe for my Spaghetti Squash Lasagna Bake which was inspired by my friend Cara:

– Preheat oven to 350 degrees.
– In a 9×13 pan, grease it well with cooking spray.
– Layer the cooked spaghetti squash on the bottom of the pan.
– In a pan, saute garlic, onions in olive oil and cook until softened.
– Add mushrooms and spinach, cooking until heated through.
– Add black pepper to taste.
– Layer the mushroom/spinach mixture on top of spaghetti squash in pan.
– (If using sausage – Cut the sausage links into thin slices and layer over mushroom/spinach mixture in pan.)
– Top with pasta sauce.
– Sprinkle italian cheese on top.
– Bake for 30-40 minutes; let it sit for 10 minutes before serving.