Tonight we headed out to Chicago’s Chinatown Square and had dinner at one of our favorite places – Lee Wing Wah. It is an authentic Chinese restaurant, but tonight, we decided to try out some of the American Chinese food on their menu.

American Chinese food typically treats vegetables as garnish while authentic styles emphasize vegetables. This can be seen in the use of carrots and tomatoes. Authentic Chinese cuisine makes frequent use of Asian leafy vegetables like bok choy and gai lan (chinese broccoli) and puts a greater emphasis on fresh meat and live seafood. As a result, American Chinese food is usually less pungent than authentic cuisine.

Although we had dinner in the heart of Chicago’s Chinatown Square tonight, we took advantage of a full meal with various dishes. The best part? It was only $13 per person – a true deal, which is common in Chinatown eats. With the amount of food, I don’t have to worry about making dinner for tomorrow night either!

We started out with wonton soup. This was an Americanized version in that only wonton dumplings in broth are served, while authentic Chinese versions may come with noodles. The true Cantonese Wonton Soup is a full meal in itself consisting of thin egg noodles and typically 5 pork and prawn wontons in a pork or chicken soup broth or noodle broth. 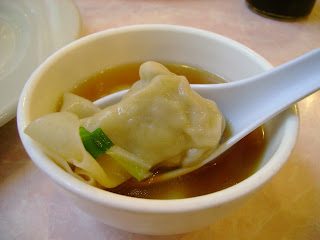 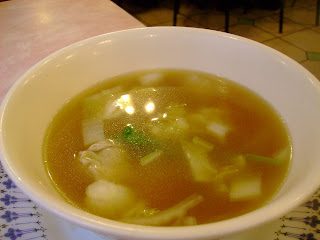 Next up was an appetizer platter that included eggrolls, beef sticks and BBQ pork. 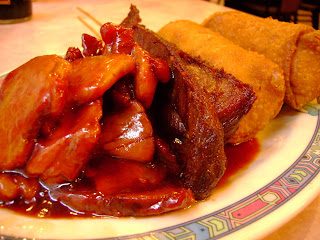 Again, an Americanized version of eggrolls was served. While authentic Chinese spring rolls or egg rolls have a thin crispy skin with mushrooms, bamboo, and other vegetables inside, the Americanized version uses a thick, fried skin stuffed with cabbage and sometimes bits of meat. In other areas, bean sprouts form the basis of most of the filling. 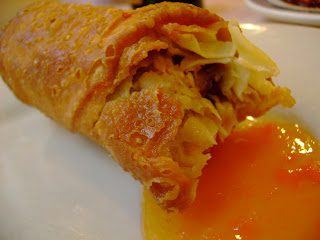 To serve as our starch, we had BBQ Pork Fried Rice. Fried rice dishes are popular offerings in American Chinese food due to the speed and ease of preparation and their appeal to Western tastes. Fried rice is generally prepared with rice cooled overnight, allowing restaurants to put unserved leftover rice to good use. 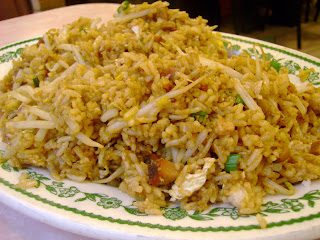 Meat that has been deep fried in bread or flour, such as the salt & pepper chicken we had as one of our entrees , is often heavily emphasized in American-style Chinese dishes. This is an American Chinese version of popcorn chicken! 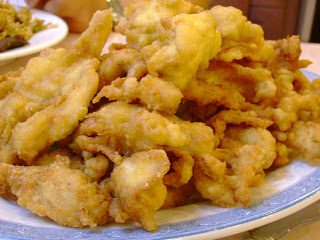 The last entree we had was Mongolian Beef, another common American Chinese dish consisting of sliced beef, typically flank steak, and stir-fried with vegetables in a sweet and savory brown sauce, usually made with hoisin sauce. The beef is most commonly paired with scallions or mixed vegetables and is often spicy. Most often, the dish is served over crispy fried cellophane noodles or steamed rice. The name of this dish is somewhat misleading, because neither the ingredients used (besides the meat) nor the preparation methods applied have anything in common with traditional Mongolian cuisine. The term “Mongolian” is rather meant to imply a vaguely “exotic” type of food. 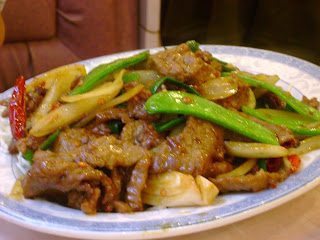 To end on a sweet note, we treated ourselves to Boba or Bubble Teas – mango and lychee with tapioca. The proper name for “Bubble Tea” is Boba tea. Boba Tea is a tea drink that originated in Taiwan in the 1980s. The term “Bubble” refers to the tapioca balls in the drink. These chewy tapioca balls, or “pearls,” are consumed along with the beverage through a wide straw. 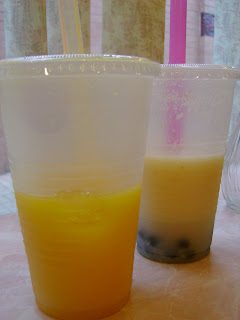 I’m thrilled we went and had some Americanized Chinese food because it’s good (not exactly healthy) and so affordable. Most importantly, I don’t have to cook dinner tomorrow with all the leftovers!