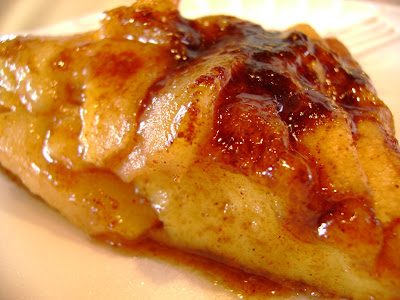 Steven L. Katz is an author and food writer whose recipes and articles have appeared in Gourmet, Bon Appetit, The Chicago Tribune, The Washington Post and more. Steve Katz grew up on Chicagos North Shore eating at Walker Bros. The Original Pancake House on Green Bay Road and has visited the original Original Pancake House in Portland, Oregon — where he met founder Les Highet. Steve’s parents grew up on Chicago’s North Shore Side and they loved the apple pancake at Chicago’s Red Star Inn Restaurant. 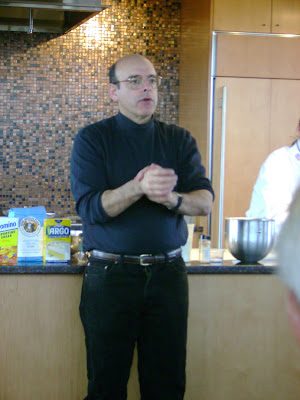 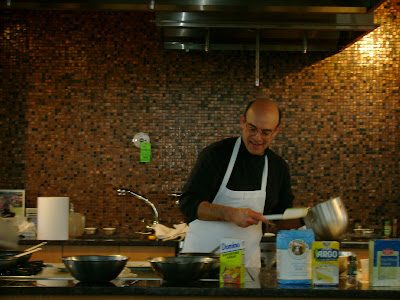 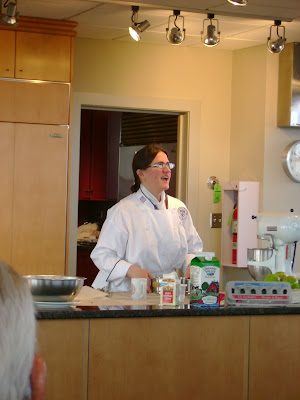 In addition to Steven & Heidi’s informative presentation, Patricia Penzey Erd, of The Spice House, shared a bit of history on cinnamon and the various kinds there are. 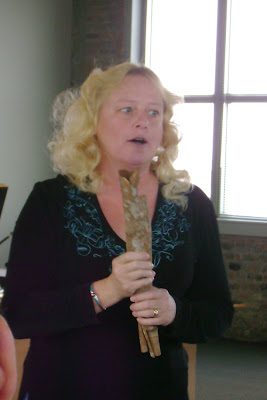 Patricia is the sister of Bill Penzey, owner of Penzeys Spices. Both are extremely knowledgeable on spices, so do check out Patricia’s website for The Spice House for all their quality spices! 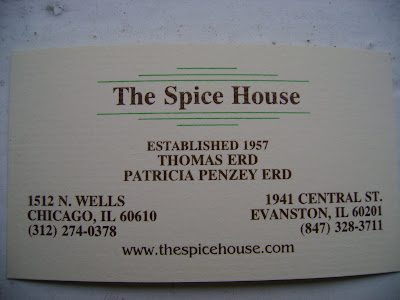 Not only was the cooking/baking science explained behind the particular ingredients that are used to make a Classic Baked German Apple Pancake, the history of how pancake houses have evolved and the specific ties to Chicago were explained. The rich culinary history and science behind such a simple, comforting food truly gives one a greater appreciation of food in general.
Here is Saigon Cinnamon (also known as Vietnamese Cinnamon). Saigon Cinnamon is used primarily for its aromatic bark. 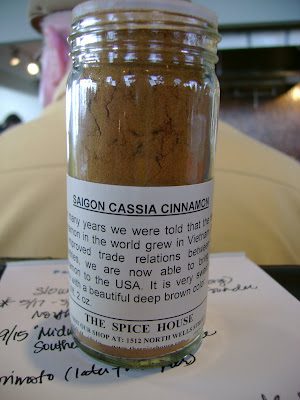 Here is Korintje Cinnamon. This cinnamon is a favorite in the baking industry. It has a 3.5% oil content making it more flavorful and robust than ordinary cinnamon. 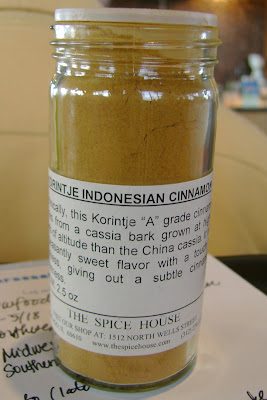 Here is Ceylon “True” Cinnamon. Complex and fragrant, with a citrus overtone and rich buff color, Ceylon cinnmamon is unfamiliar to most Americans. Although less strong than cassia, it is prized in both England and Mexico where it is preferred over cassia for all uses. 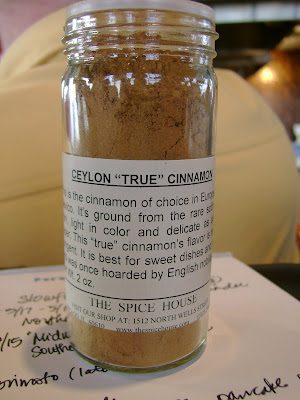 Patricia also shared with us her prized cinnamon stick, which was signed by the famous Julia Child herself! 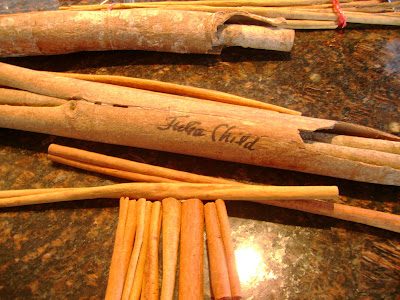 To make a Classic Baked German Apple Pancake,
here are some key ingredients & information to take note of:

Granny Smith Apples – they provide the right amount of tartness and can hold up to the high heat when its baked. 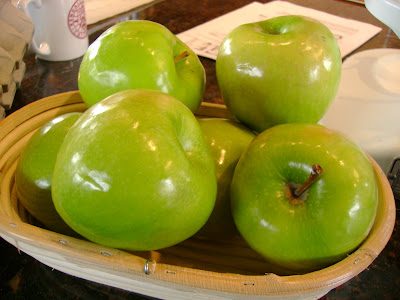 The apples are sliced and are placed in acidulated water — that is in water with
lemon juice and then sauteed for 3-4 minutes in 1 tablespoon of butter. The acidulated water helps the apple slices to maintain its shape and texture before introducing it to the pancake batter. 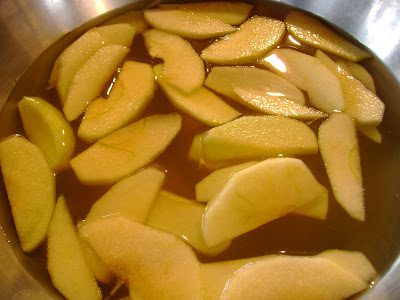 The streusel or cinnamon sugar mixture is one that can heat and melt enough to form a caramel, without hardening. This adds the sticky sweet element needed in a good Baked German Apple Pancake recipe. 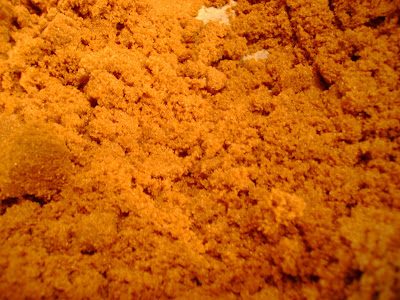 In addition to eggs, skim milk and a touch of heavy cream, the dry ingredients in creating the pancake batter involves the use of Vital Wheat Gluten. This adds additional protein to the scientific makeup, allowing the pancake to “bubble up” around the edges – a special characteristic of big apple pancakes. 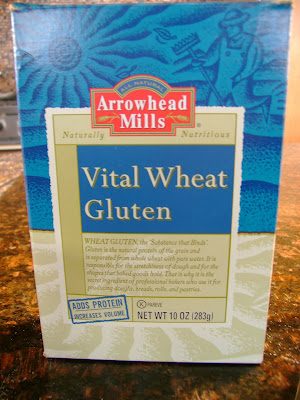 Here is the recipe that Steven & Heidi prepared for us at the event:

This recipe is prepared by lightly sauteing apples in butter and then laying them in a dry bed of blended sugar and cinnamon. The batter is then poured over the aples and the pan is placed in the oven.

When finished, the pancake is inverted onto a serving plate with the caramelized apples on the top. 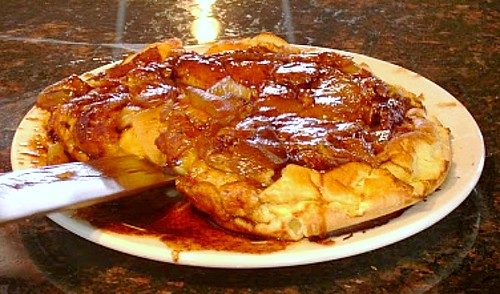 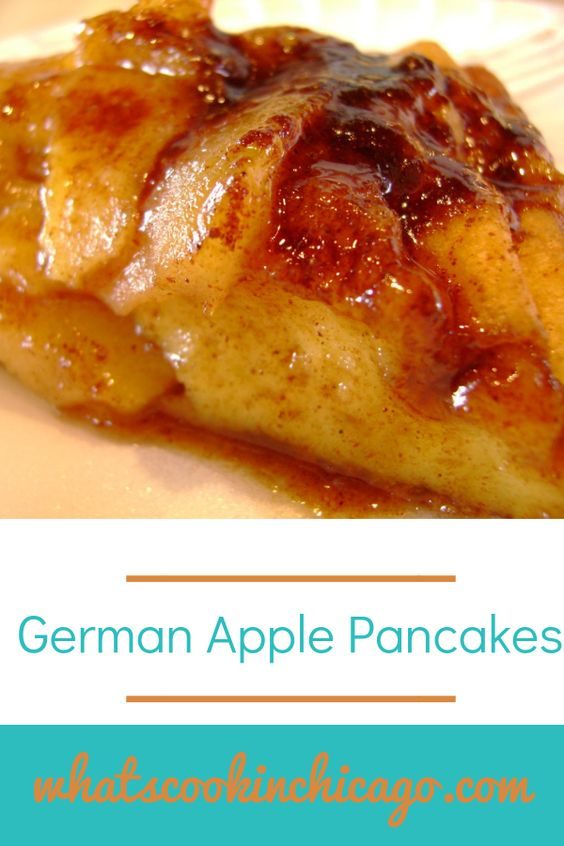 – Using electric mixer with whisk attachment, whisk eggs until foamy, then pour milk & cream into mixer bowl and blend well.
– Mix dry ingredients together in separate bowl, then add gradually to egg mixture, a tablespoon at a time, on low to medium power. Continue mixing, scraping sides on bottom with rubber spatula. Then mix on low speed for five minutes.
-Let batter sit for at least 10-15 minutes.

– Prepare the apples by melting 1 tablespoon butter in pan.
– Place 30 apple slices in pan and saute for 4 minutes covered at medium heat turning one or twice. The apples should be sweating, not browned or cooked through. Remove apples to a separate bowl.

INTRODUCING THE BATTER:
– Preheat oven to 300 degrees
– Measure exactly 1 3/4 cups of batter and pour batter over the apples that have been placed over the cinnamon sugar mixture in the pan.
* If you pan appears to fill up before using all the batter, fill the pan with batter up to at least a 1/4 inch below the rim. It will not overflow because the initial baking cycles are at low heat and the batter will set.
– Place pan in preheated oven and reduce heat to 250 degrees. Bake for 30 minutes.
– Remove pan from oven, cover with foil and place on stovetop to rest.
– Increase oven temperature to 500 degrees.
– When oven reaches 500 degrees, remove foil and place pan in oven; immediately reduce temperature to 450 degrees and bake for 12-15 minutes.
* Watch carefully during the last 5 minutes until the pancake has risn significantly and the top edges are deep brown. (This level of doneness helps the pancake stay up when inverted.)
– Have a serving platter or large dinner plate ready where you serve the pancake.
– Remove pan from oven, carefully invert pan onto serving plate by holding plate with one hand. Serve immediately. 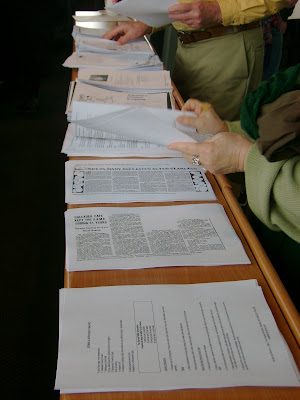