Tonight was my cupcake party that I hosted with my friend Suzanne. We spent the evening decorating bakery bought cupcakes and brownie bites with buttercream frosting and also rolled fondant. It was a sweet success! 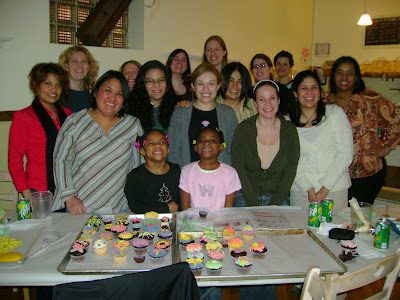 Here’s a cupcake primer: A “cup” cake in 19th Century America might have been a small cake, but it wasn’t necessarily so. They were so called because the ingredients for them were measured in cups instead of weighed, as had been the custom. According to “Baking in America” by Greg Patent, this was revolutionary because of the tremendous time it saved in the kitchen.

Whether it was a “cup,” “measure” or “number” cake, the shift to measuring from weighing was indeed a significant one, according to “The Oxford Encyclopedia of Food and Drink in America.” But it goes on to explain that the cup name had a double meaning because of the practice of baking in small containers – including tea cups.

The cups were for convenience because hearth ovens took an extremely long time to bake a large cake – and early cakes, by the way, were enormous — and burning was common. Gem pans, early muffin tins, were common in households around the turn of the 20th Century and cupcakes were then baked in those.

(And if you’re wondering, it was 1919 when Hostess introduced the famous snack cupcake, but it didn’t become the cream-filled, squiggle-topped Hostess Cup Cake we know today until 1950.)

It’s interesting to note that the cakes were likely called “number” cakes because of a mnemonic device for remembering the recipe: One cup of butter, two cups of sugar, three cups of flour and four eggs plus one cup of milk and one spoonful of soda.

The formula became known as the one-two-three-four cake, and today’s cupcakes are mostly still made with similar traditional cake ingredients.

Here are 2 cupcakes I decorated the day after since I didn’t have enough time to really decorate (I was too busy playing hostess!):