On my day off, I checked my cupboards for something sweet I could whip up. Staring at me was a bottle of lime juice. Another cupboard was a box of graham cracker crumbs. On another shelf, I found some forgotten cans of condensed milk. Hmmm… seemed obvious to me that a key lime pie was in order!

Interestingly, canned sweetened condensed milk was used, since fresh milk was not commonly found in the Florida Keys before refrigerators were available. Also, true key lime pies are not green. Instead they are yellow just like the key lime juice and also due to the use of egg yolks in the traditional recipe.

Early recipes didn’t require baking this pie. When mixing the filling, the condensed milk and the acidic lime juice starts to thicken on its own. However, in the interest of safety due to consumption of raw eggs, key lime pies are now usually baked for a short time. The baking also thickens the texture even more producing a firmer pie. 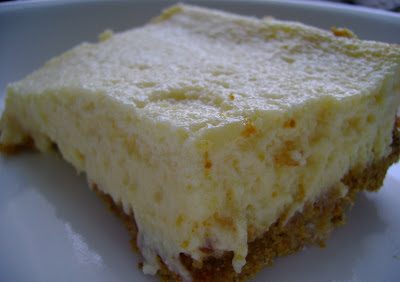 Here is a recipe for Key Lime Pie Bars, which I made in a large pan instead of a pie pan:
(adapted from AllRecipes.com)

Separate 2 of the eggs, placing the two egg whites into a mixing bowl. Reserve the yolks in another bowl.

To the yolks, add one whole egg, lime juice and sweetened condensed milk. Whisk until smooth. With clean mixer blades or a whisk attachment, beat the egg whites with cream of tartar until stiff, but not dry. Fold whites into filling mixture. Pour filling into partially baked crust.

Bake in preheated 325 degrees F (165 degrees C) for 10 to 15 minutes or until set. Let cool at room temperature, then freeze 4 hours to overnight. Just before serving, whip cream to form stiff peaks. Serve decorated with whipped cream and lime slices.

I doubled this recipe easily. 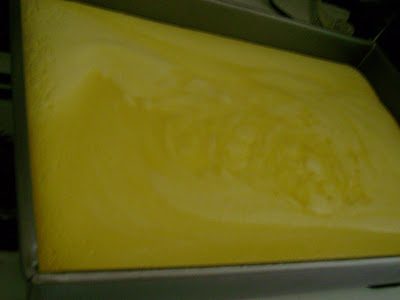