Still going on my asian cooking streak, my husband had a hankering for steak. So what better way to use steak in asian cooking than making beef stir fry?

Most home kitchens in America are poorly equipped to stir fry properly. The average kitchen is not designed to handle the large amount of oil vapor produced as a byproduct of proper stir frying. Those stir frying at home cannot achieve the same flavor as in restaurants because the wok is neither hot enough nor big enough to allow fast tossing. By contrast, most Chinese home kitchens are designed with stir frying in mind. The kitchen itself is either in a separate building or in a room with access to the outside. In our vacation home overseas, we have what we call a “dirty kitchen” that is outdoors and can accomodate stir frying and allow for proper ventilation.

Western-marketed woks with non-stick coating are not considered appropriate for proper stir-frying because the Teflon coating usually disintegrates after exposure to high heat. By contrast, low heat non-stick stir-frying is an oxymoron according to Cantonese cooking standards. Teflon woks also require the use of Teflon-safe utensils made of plastic or wood, which some traditional Chinese stir fryers only use metal utensils. Western woks are also usually flat-bottomed to accommodate for western stove tops that are flat, where a round-bottomed wok would roll around.
Many Western cooks on TV demonstrate stir frying on low heat with a small wok and a stirring motion comparable to tossing a salad. This is a western adaptation of stir frying, and is different from the traditional Chinese method.
Well, despite the proper methods of stir frying, I prepared Beef Pepper Steak in my flat bottomed pan and it still turned out wonderfully! 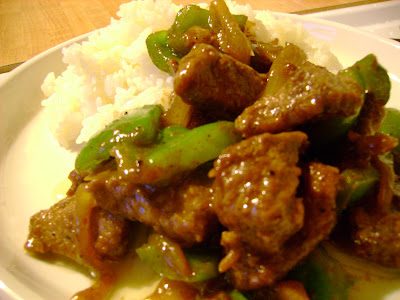 Here is my recipe for Beef Pepper Steak:

In a skillet over medium high heat, add oil. When it’s hot, add the garlic and onion and saute until onion is softened.

Add the beef to the skillet and cook until browned.

Add the green pepper to the skillet once the beef has browned. oooking until the bell peppers have softened.

Once the beef is browned and bell peppers are softened, the skillet will have some browned bits stuck to the bottom. This is known as fond. Add1/2 cup water, 2 tablespoons soy sauce and 1 tablespoon oyster sauce and scrape up the browned bits on the bottom of the skillet. Doing so deglazes the pan and the fond adds a bit of flavor to the sauce. Bring the sauce to a boil.

Combine the remaining  2 tablespoons water and 2 tablespoons cornstarch in a small bowl.until the cornstarch dissolves. This mixture is known as a slurry. Add slurry to the skillet and bring to boil. The slurry thickens the sauce.

Check the seasoning of the dish and season with salt & pepper to taste.

I served this over jasmine rice.