Home » Bell peppers » Love is in the Air…

Today marks our one year wedding anniversary and to start it off, I prepared my loving husband a big breakfast including a fresh veggie omelette, oven baked bacon and buttered toast.

An omelette or omelet or omlet is a preparation of beaten egg cooked with butter or oil in a frying pan, usually folded around a filling such as cheese, and/or mushrooms. Gourmet cook Julia Child famously described an omelette as soft-cooked scrambled eggs wrapped in an envelope of firmly-cooked scrambled eggs. 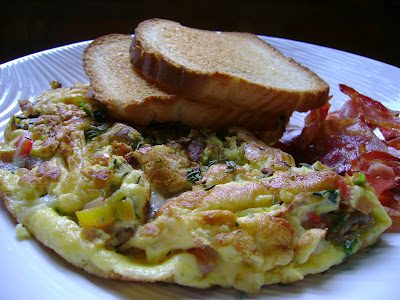 Here is my recipe for veggie omelettes (serves 2):

Spray large saute pan with cooking spray.
Saute green onion and mushrooms.
When mushrooms have caramelized, add peppers.
When peppers have softened add remaining ingredients.
Cook through until heated.
In a separate bowl, whisk eggs.
Add water & a pinch of kosher salt to eggs.
Add scrambled eggs over sauted veggie mixture.
Allow eggs to set over medium heat.
When is it almost fully cooked, sprinkle cheese on one half of egg.
Fold over other half of egg over the cheese portion.
Slide onto plate to serve.
Sprinkle fresh thyme leaves for extra flavor.

I served this with buttered toasted a oven baked bacon.
Previous Post: « Fresh Birdie Burgers
Next Post: Love is in the Air Tonight… »