Today for lunch I wanted to use some of the goodies I picked up from my recent trip to a Korean grocery store. What resulted was an eclectic mix of ingredients for a stew with a soy & tomato sauce. One of the ingredients I used were enokitake mushrooms. 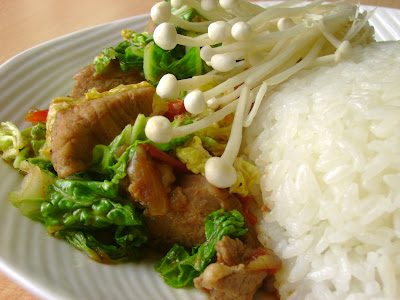 The mushroom is available fresh or canned, the fresh mushroom being my preference. They are traditionally used for soups, but can also be used for salads and other dishes. They have a fruity flavor and a crisp texture. The mushroom can be refrigerated for about one week. 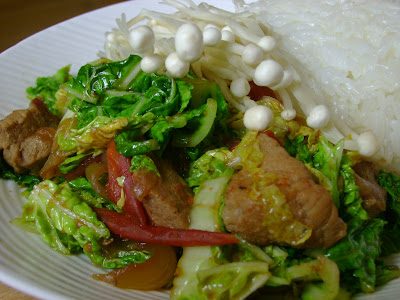 In a dutch oven, place about 2 tablespoons olive oil.
Heat dutch oven over medium heat.
Add sliced onions and garlic.
When onions have softened, add pork.
Add seasonings and stir, browning pork.
When pork has browned, add water and soy sauce.
Stir and add tomatoes.
Allow sauce to reduce to half.
Turn off heat and toss in napa cabbage.
Before serving, garnish with enoki mushrooms, with thick stems cut off.