Okay, my apologies to those that were grossed out with the previous post on balut. But please don’t say I didn’t warn you! 🙂 Moving on to daily eats, here’s a filipino dish that’s true comfort food for us, sinigang. We made this for dinner since we were feeling lazy with the heat wave coming through Chicago.

Sinigang is a filipno dish famous for the variety of ingredients one can use as well as for its taste. Sinigang is typically sour and is most often likened to Thailand’s tom yum.

Sinigang often incorporates stewed fish, pork, chicken, shrimp, or beef. Sinigang’s characteristic taste is attributed to the ingredient that gives its sour taste, not to the meat’s flavor.

Pork sinigang, the most common variety, is usually prepared with tamarind, tomato, leek, taro, and onion. Other vegetables cooked in sinigang may include cabbage, okra, spinach, radish, green pepper and string beans. Naturally, vegetarians would love this dish since various vegetables lends itself nicely with the flavor of tamarind.

Another variety is prepared with guava and is less sour than those with tamarind. Raw mango, calamansi and kamias can also be utilized. Surprisingly, that sour flavor is not because of vinegar, which many people may confuse it as. Powdered soup base or bouillon cubes cubes for sinigang are also used in place of natural fruits.

Most filipinos here in the US don’t have the time to gather those exotic fruits to create that sour flavor that sinigang is used for. Instead, most people use the powdered soup base such as that above. 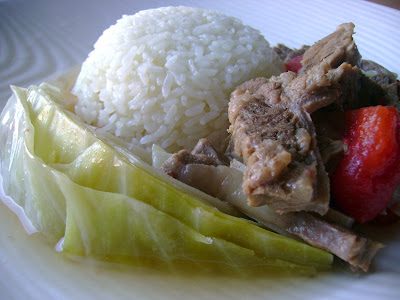 This is not a hard dish to make – even for those who aren’t familiar with filipino food. Here’s a common recipe for Sinigang, which is even found on the back of the powdered soup base package…

In a dutch oven or pot, add pork.
Cover with water and let boil until cooked.
Drain pork and run through cold water to rid of the “residue”.
Place pork back in clean pot and cover with water.
Add 1 package of sinigang soup base.
Add tomatoes, garlic & onions.
Let it come to a boil.
Depending on which vegetables you use, add the veggies that take longer to cook first.
Reduce heat and allow veggies to cook through.
Remove from heat and add other veggies on top.
Cover and let steam to cook.
Stir before serving over rice or eat as a soup.

This can be made vegetarian my omitting the meats and cooking up the veggies in the soup base.