This recipe was featured in my Springtime Cupcake swap event, which you can read about HERE. 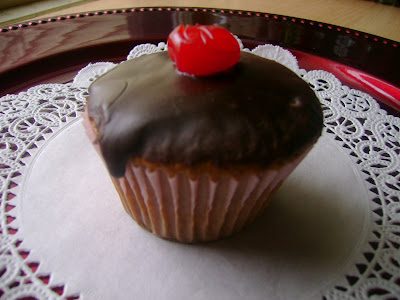 Prepare yellow cupcakes as directed.
In the meantime, prepare the vanilla custard filling by combineing the instant pudding with the half & half in a medium bowl.

In a stand mixer using the whip attachment, place cream, vanilla and powdered sugar on medium speed. Whip the cream until you get soft peaks.

Gently fold in pudding mixture into the whipped cream until fully incorporated.

Place filling into a piping bag or makeshift ziploc bag, fitted with a coupler and a #21 tip.

When cupcakes have cooled, place tip inside the center of each cupcake and pipe in filling, being careful not to overfill.

When all cupcakes are filled, have your ganache (or melted chocolate frosting) ready and dip only the tops of the cupcakes. Place glazed cupcakes on a cooling rack to dry.

Drain and pat dry maraschino cherries. While cupcakes are slightly “wet’ from the glaze, place a cherry on top to garnish.