Home » Asian: Chinese » Orange Chicken
With the Tasty Tools event finished, I guess I should submit a recipe using my microplane grater too! But before I get to the recipe….

Everyday on my commute home on the days I’m in the office, I pass the popular Chinese food chain, Panda Express. One of their popular dishes is the Orange Chicken (sometimes you’re lucky if an employee waves a sample morsel for you on a toothpick as you walk past). So why is it so popular? Better yet, how can I recreate it successfully at home? 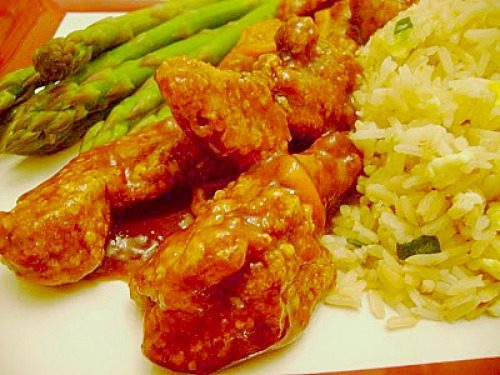 The answer that I found was in the book, Cooking at Home With America’s Test Kitchen (2006). (I’ve been on a cookbook spree to revive some recipes I have stashed in my bookshelves.) Here’s what ATK has to say about the recipe: We prefer the flavor and texture of thigh meat for this recipe, though an equal amount of boneless skinless chicken breasts can be used. It is easiest to grate the orange zest and remove the strips of orange peel before juicing the oranges; use a sharp vegetable peeler to remove the strips. For extra spiciness, increase the cayenne added to the sauce to 1/2 teaspoon. The whole dried chiles are added for appearance, not for flavor, and can be omitted. To fry the chicken, use a Dutch oven or a straight sided saute pan (with at least a 3 quart capacity): do not use a 12 inch skillet with sloped sides, as it will be too small to contain the oil once the chicken is added. White rice and steamed broccoli are good accompaniments.