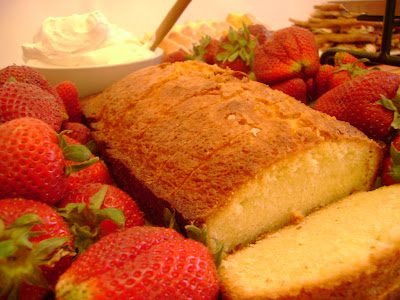 For my tea party, I decided to make a classic vanilla pound cake, which I served with real whipped cream and fresh strawberries. It’s a classic recipe from a magazine (condensed version), The Best of America’s Test Kitchen: Best Recipes and Review 2008. My only change is using vanilla paste instead of vanilla extract, which was called for in the recipe. Vanilla paste is my new fave ingredient du jour because it adds so much more vanilla flavor than regular vanilla extract. I prefer the Nielsen-Massey brand: 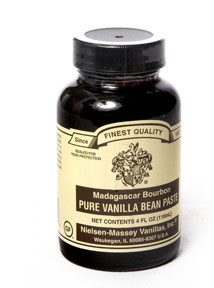 What makes this a best recipe: Pound cake only requires a few ingredients, but it is far from simple. More often than not, it bakes up heavy, squat and dense. Pound cake recipes date back to the 18th century and originally called for a pound each of flour, sugar, butter and eggs. But the historical recipes we’ve tried were too heavy and dense to please modern palates. For this recipe, we put an end to all the nonsense and retooled a classic recipe to make it more reliable. We found that giving the cake lift and a lighter crumb without the addition of a chemical leavener demanded maximum aeration from the butter. After much trial and error, we realized that warm butter is too slack to aerate, so our recipe started with chilly 60 degree butter. After the butter and sugar were properly creamed, we beat the eggs and added them very gradually, which produced a more voluminous batter and higher rise in the cake. It was time to add the flour, and we liked the more delicate crumb that cake flour produced. We found that sifting the flour over the batter (and folding it in by hand) lightened and fluffed the flour, making it easier to incorporate, which also reduced the overworking the batter. We serve this cake on its own, but its also great with fresh berries and whipped cream.