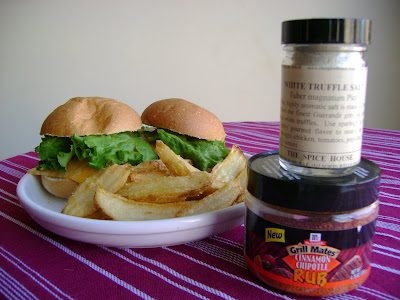 As for recipes, I really owe it to the 2 food products that made the meal. McCormick brand recently made a few new rubs and spices, one of which I tried out today. Their Cinnamon Chipotle Rub sounds interesting to begin with but the flavor is amazing. To prepare my chicken, I sprinkled some of the rub on 2 boneless chicken breasts with a touch of extra virgin olive oil. I marinated the chicken overnight so that the flavors would really shine through. I then grilled the chicken, cut in half and served them on dinner rolls (think sliders). Topped with a slice of colby jack and some lettuce, dinner was set. The chicken was so flavorful I didn’t need any additional toppings. You can purchase McCormick’s Cinnamon Chipotle rub at local supermarkets nationwide.
To accompany my sliders, I quickly deep fried some crinkle fries and used a special White Truffle Salt to season. A little goes a long way with this salt and wow… the flavor is amazing. This salt was the only reason I purchased frozen french fries (which I rarely buy – and I’m too lazy these days to make fries from scratch). You can purchase this White Truffle Salt through my favorite spice place, The Spice House.
Previous Post: « Rice Pudding Rescue
Next Post: Frozen, Creamy Coffee… Ice Cream! »