Home » Desserts » Rice Pudding Rescue
How often do you throw food out? Weekly? Daily? For me, I just can’t do it if at all possible. In fact, when I made some horchata recently, I was left with a few cups of processed rice. To prevent throwing it out, I decided to make rice pudding. 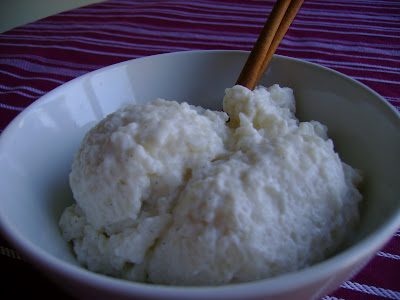 Initially I was hoping to find a unique recipe to liven up the usual rice pudding recipes. One I contemplated was a pina colada rice pudding, however I got a bit lazy and resorted to a simple recipe. In fact, I used Ina’s recipe below, from the Food Network. I ended up doubling the recipe since I had so much rice to work with. It was good for some simple but I think I’ll try playing with it by incorporating some additional flavors for next time.

In a small bowl, combine the raisins and rum. Set aside.

Combine the rice and salt with 1 1/2 cups water in a medium heavy-bottomed stainless steel saucepan. Bring it to a boil, stir once, and simmer, covered, on the lowest heat for 8 to 9 minutes, until most of the water is absorbed. (If your stove is very hot, pull the pan halfway off the burner.)

Stir in 4 cups of half-and-half and sugar and bring to a boil. Simmer uncovered for 25 minutes, until the rice is very soft. Stir often, particularly toward the end. Slowly stir in the beaten egg and continue to cook for 1 minute. Off the heat, add the remaining cup of half-and-half, the vanilla, and the raisins with any remaining rum. Stir well. Pour into a bowl, and place a piece of plastic wrap directly on top of the pudding to prevent a skin from forming. Serve warm or chilled.