Home » Cheese: Parmesan » When Spinach & Cheese Comes Together…
It’s time for pasta! My hubby doesn’t really like pasta too much but if anything, he prefers baked pasta dishes such as cannelloni. I had quite a bit of spinach to use so I thought a spinach & cheese cannelloni would be in order. I served this with sliced italian sausage. The recipe I used was inspired by Sara Moulton’s version. 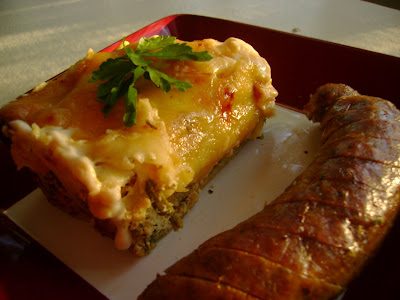 Melt butter in a saucepan over low heat. Whisk in flour and cook the roux, whisking, 2 minutes. Add the half & half and whisk, bringing to a boil over medium high heat. Reduce heat and simmer, whisking occasionally, 2 minutes.
Whisk in salt, pepper, and nutmeg. Remove from heat and whisk in cheese, then cover.

To make the cannelloni:
Heat oil in a 5 to 6-quart heavy pot over moderately high heat until hot but not smoking, then saute onion and garlic, stirring occasionally, until lightly browned, about 5 minutes. Add spinach and saute, stirring, until just wilted, about 3 minutes. Remove from heat and cool completely.
Stir together ricotta, egg, parsley, salt, pepper, and cheese in a bowl, then stir in spinach mixture.

Preheat oven to 425 degrees F.
Spread 2/3 cup sauce in buttered baking dish.
Spread about 1/3 cup ricotta filling in a line along 1 short side of 1 pasta rectangle, then roll up to enclose filling. Transfer, seam side down, to baking dish.
Make 7 more cannelloni in same manner, arranging snugly in 1 layer.
Spread 1/2 cup more sauce over cannelloni and sprinkle with remaining cheese.
Bake, covered with foil, in middle of oven until sauce is bubbling, about 20 minutes.
Turn on broiler. Remove foil and broil cannelloni about 5 inches from heat until lightly browned, 2 to 4 minutes. Let stand 5 minutes before serving.
Reheat remaining sauce and serve on the side. 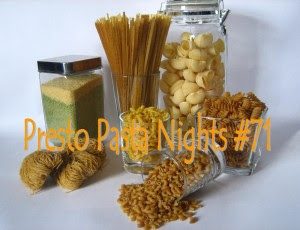 **I’m also submitting this to the Presto Pasta Nights blogging event! This week the event is hosted by Gay of A Scientist in the Kitchen. Be on the lookout for great pasta recipes with their roundup coming up next week!**
Previous Post: « Spinach Basil Stuffed Pork Tenderloin
Next Post: L’eau de Cilantro »