Home » Cooking Class » Tamale Time!
Today, friends and I got together to make tamales! It was a great day and a lot of fun to sit and talk, while making tamales. Making tamales is usually a very lengthy and time consuming process. Each component of making tamales can be done in advance, which makes it easy when you have friends over to make/assemble them. Prior to everyone coming over, I made the fillings, masa and soaked the corn husks so all that we needed to do was assemble them.
For fillings, I offered several kinds including:
salsa verde, citrus & lime chicken
beef & chorizo
southwestern pork carnitas
carmelized onions & peppers
corn & black bean
authentic & vegetarian refried beans
Some additional ingredients I provided for filling our tamales:
cilantro
green onions
salsa verde
roasted tomato salsa
mexican blend cheese

To go with our tamale lunch, I also made:
Mexican Rice 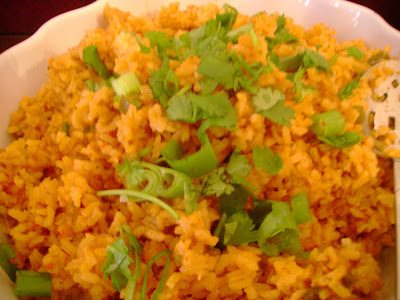 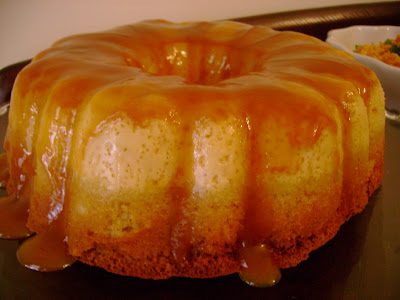 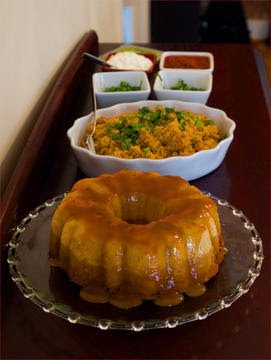 Here are some pics of the event and the recipes to follow: 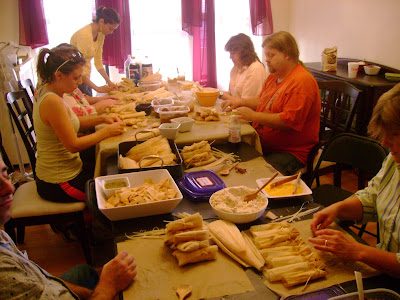 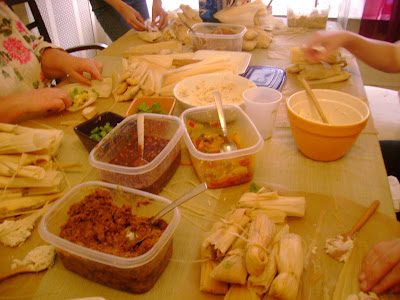 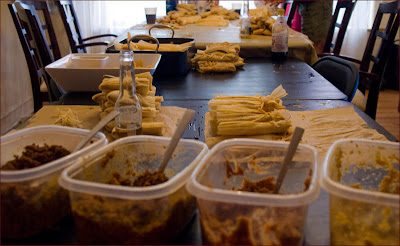 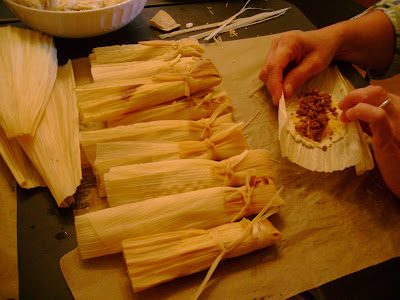 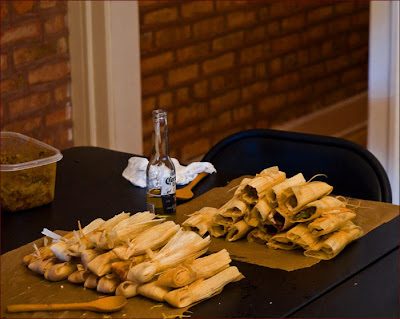 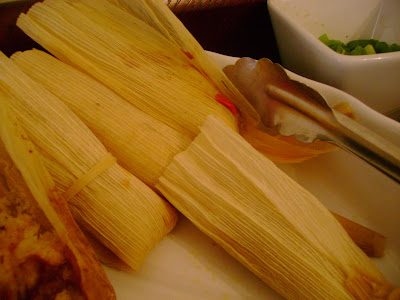 In a stand mixer with your paddle attachment, mix the lard or butter/margarine until fluffy.
Alternate adding the masa flour and chicken broth/water in the stand mixer with the salt.
Continue mixing the mixture until your dough comes together.
To check whether your dough is ready, take about 1/2 a teaspoon of the dough and place it in a cup of cold water. If the dough floats, the dough its ready.

You can find dried corn husks at various stores including some supermarkets or ethnic markets. I picked mine up from an ethnic market and asked the staff for them since its something they don’t always put out. (It helps to know your neighborhood grocery staff too!)

To prepare the corn husks for tamales, you will need to soak them for 30-45 minutes in hot water. I filled up my large 20 qt stock pot with water and heated it up to a boil. I then turned off the heat, placed the husks in the pot until they were fully submerged, topped the husks with a heavy plate (to keep them submerged) and covered the pot. After 30-45 minutes, I pulled the husks out with tongs and placed them in my large roasting pan. This made it easy to bring to the table for folks to use the husks.

There are so many ways to assemble tamales, but for my event, we kept it simple. To assemble, spread a heaping tablespoon across the widest part of the corn husk. Spread it to a nice thin layer. Down the middle of the masa, place your filling in a line, being careful not to overfill! Take the sides of the tamale and fold it over towards the middle. Fold up the narrow bottom and tie it with a sliver of corn husk. I’m sure if you did a search online, you’ll find so many fun and different ways to package these tasty tamales.

Now that you have your tamales made, you’ll want to steam them in a large pot with a steamer basket. If you don’t have a large pot with a steamer basket, crumple a large piece of foil into a ball and place in a wok, dutch oven or the largest/deepest pot you have. Place your tamales inside the pot and have it lean against the foil ball, all the way around. Carefully fill the pot with water until you have an inch of water. Cook over high heat for 45 minutes to 1 hour, covered. Check the level of the water every so often to make sure it hasn’t completely evaporated. The tamales are done when it peels away from the corn husk easily and the masa turns a slight shade of yellow.

If you need some visuals, here is a link with some step by step pictures and thorough explanations on how to make tamales.