Nothing smells better than cinnamon on Christmas morning! For brunch, I wanted something sweet to add to our menu and decided on a Cinnamon French Toast. Although you could certainly make homemade Cinnamon bread (which would be much better I assume), I opted to go the convenient route by using Cinnabon Cinnamon Bread. The orginal recipe calls for Italian Panettone Bread. 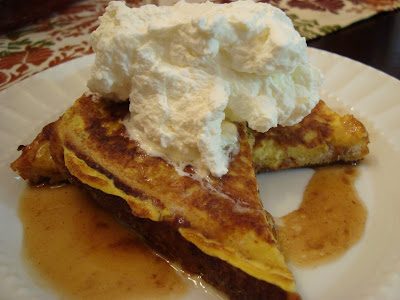 – Preheat the oven to 200 degrees F.
– In a large bowl, whisk the eggs until well blended.
– Add the cream, milk, and sugar and whisk until well mixed.
– Melt 1 tablespoon of butter on a large nonstick griddle over medium heat.
– Dip 3 slices of cinnamon bread into the custard, turning to allow both sides to absorb the custard.
– Grill the soaked bread slices until they are golden brown and firm to the touch, about 4 minutes per side.
– Transfer the French toast to a baking sheet and keep them warm in the oven.
– Repeat with the remaining butter, bread slices, and custard.

– Transfer the French toast to plates. Dollop the fresh whipped cream atop each. Lightly dust with the powdered sugar (optional). Drizzle the cinnamon syrup over and around the French toast and serve immediately.

Cinnamon Syrup
(which I doubled)

Combine water and brown sugar in a heavy medium saucepan. Bring to a boil over high heat, stirring until the sugar dissolves. Boil until the syrup reduces to 2 cups, about 10 minutes. Remove from the heat and whisk in the cream and cinnamon. Keep the syrup warm. (The syrup can be made 1 day ahead. Cool, then cover and refrigerate. Rewarm before serving.)