One of my favorite fish dishes is from my Tita Cora. Tita Cora (aka ‘Auntie’ Cora, my husband’s first Aunt) usually makes a steamed fish often for the holidays or just get togethers throughout the year. She uses various kinds of fish, but the flavors of lime, cilantro and ginger are always the same. Tita Cora is an amazing cook, as she should be since she had her own Filipino restaurant for many years.

This recipe is one inspired by my Tita Cora. I had some whole tilapia that have been scaled and gutted ready to use… so preparing similarly as Tita Cora was the first thing that came to mind. I don’t know how often you cook or prepare whole fish as some folks don’t feel comfortable with dishes that stare back at you. But having grown up around dishes that stare back at me, this is pretty normal to me and takes me back to my ethnic cooking roots. 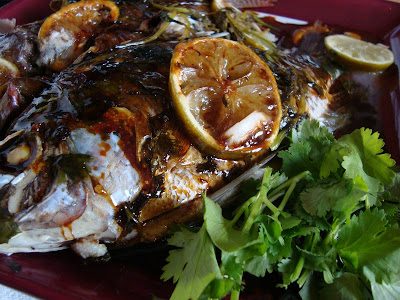 – In a large bottom dutch oven or wok, add water, shrimp broth cube and sliced ginger.
– Place bamboo steamer on top of wok or metal collapsable steamer in your dutch oven.
– Season tilapia with salt & pepper on both sides. Place in steamer.
– Top tilapia with fresh cilantro.
– Place lime slices over the cilantro.
– Cover and let fish steam until done; 15 to 20 minutes. Remove and place on serving platter.
– While fish is on serving platter, in a small sauce pan, heat oil and soy sauce. Let it come to a boil to thicken and set aside.
– Pour mixture over fish and serve hot with rice. 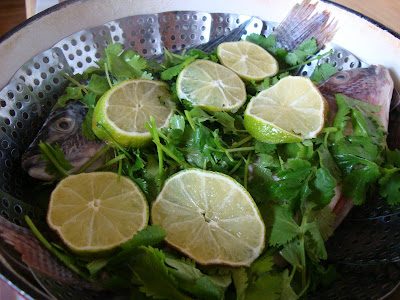