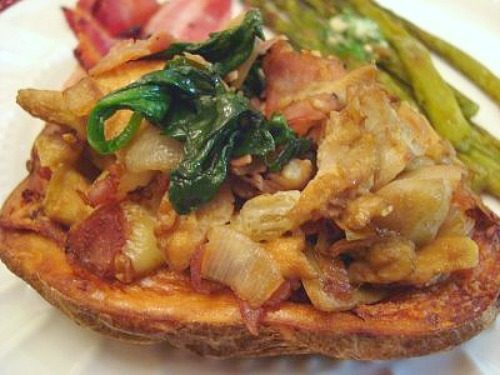 One of my favorite breakfast foods is a hearty omelette. Something about lots of vegetables, a touch of cheese and perhaps some salty breakfast meat snuggled inside a blanket of fluffy eggs is so comforting to me. For Christmas brunch I had to include an omelette but wanted to add a twist.

A few weeks ago, I had brunch at a French bistro, Bistrot Margot. From their menu, I ordered a dish that consisted of a crispy potato skin filled with scrambled eggs, chives, and bacon which was garnished with creme fraiche. It was outstanding and ingenious… and I knew I could recreate this at home. So for Christmas brunch, I used that dish as my inspiration.

My version is stuffed with sauteed spinach, artichoke, bits of brie cheese and a little ham tossed with scrambled eggs. It’s a great way to start the morning while using up random ingredients you have on hand!

Preheat oven to 425 degrees.
Scrub your potatoes and with a fork, poke holes throughout to allow potato to steam.
Place potatoes in the microwave for 4-6 minutes until cooked through. Cool.
Once potatoes are cool enough to handle, split the potatoes in half lengthwise and scoop out the middles to create a potato shell.
Spray the inside of the potato shell with cooking spray and bake in the preheated oven until golden brown & crispy.

While potatoes are baking, in a saute pan, heat olive oil.
Add onions and garlic and cook until softened.
Add spinach, artichoke and ham and cook until heated through.
Place spinach mixture in a large mixing bowl to cool.

In another bowl, scramble the eggs with milk, salt & pepper.
Fry up the eggs in the saute pan until no longer runny.
Place scrambled eggs in the large mixing bowl with the spinach mixture.
Toss spinach mixture and eggs together until fully combined.
Add the brie and toss once again.

While stuffed potato boats are baking, combine the sour cream and milk in a small bowl
When potato shells are done, serve and garnish with sour cream mixture.