I made the following recipe for our annual Holiday Party where our menu highlighted Floribbean cuisine. Tres Leches is a popular dessert in Mexican cuisine. I added it to my menu as a bundt cake. Originally I wanted to do individual cupcakes, but I had more than enough to do as it is and so I opted to take the easier route for this one. It was a great recipe and looked great displayed! 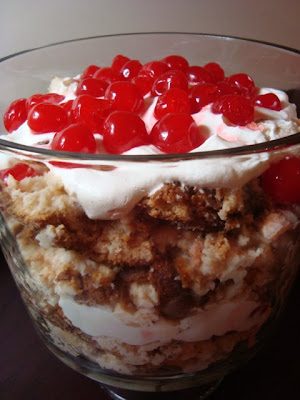 Preheat the oven to 350 degrees F. Lightly oil and flour a bundt pan and set aside.

Whisk together the cake flour, baking powder and salt in a medium mixing bowl and set aside.

Place the butter into the bowl of a stand mixer. Using the paddle attachment, beat on medium speed until fluffy, approximately 1 minute. Decrease the speed to low and with the mixer still running, gradually add the sugar over 1 minute. Stop to scrape down the sides of the bowl, if necessary. Add the eggs, 1 at a time, and mix to thoroughly combine. Add the vanilla extract and mix to combine. Add the flour mixture to the batter in 3 batches and mix just until combined. Transfer the batter to the prepared bundt pan. This will appear to be a very small amount of batter. Bake on the middle rack of the oven for 20 to 25 minutes or until the cake is lightly golden and reaches an internal temperature of 200 degrees F.

Remove the cake to a cooling rack and allow to cool for 30 minutes to an hour. Poke the top of the each cupcake all over with a skewer or fork (I used a chopstick). Allow the cake to cool completely and then prepare the glaze.

Whisk together the evaporated milk, sweetened condensed milk and the half-and-half in a 1-quart measuring cup. (I also added about 1/3 cup caramel sauce for additional sweetness.) Once combined, pour the glaze over the cupcakes. Refrigerate the cake overnight.

Place the heavy cream, sugar and vanilla into the bowl of a stand mixer. Using the whisk attachment, whisk together on low until stiff peaks are formed. Change to medium speed and whisk until thick. Spread the topping over the cake and allow to chill in the refrigerator until ready to serve.

Slice cake into cubes and layer in a trifle bowl with whipped cream and maraschino cherries.