Home » Food Gifts » A Thousand Done, Another Thousand to Go…

I’m in awe that this is the 1000th blog post I have made since I created Joelen’s Culinary Adventures back in January 30, 2007. Who knew that I would have made it this far?! It’s been quite an adventure to say the least! Looking back, it’s evident how I’ve grown quite a bit more comfortable in my kitchen and in the culinary scene of Chicago. Here are some of my favorite highlights of the past 1000 blog posts…

March 11, 2007 – Home & Housewares Show 2007
I was able to meet so many chef celebrities! Such a fun time with lots of great inspiration from some of the chefs I respect and admire.

June 13, 2007 – Lights, Camera, Action!
I was given the opportunity to be a reoccuring guest speaker for the food & cooking segment of a local Asian news broadcast. I filmed an episode and it was so much fun! It really made me miss my thespian years when I was active in stage plays.

March 17, 2008 – Home & Housewares Show 2008
This was another fun time rubbing elbows with chef celebrities! Even more fun was having fellow blogger, Elly of Elly Says Opa! joining me!

April 6, 2008 – ‘The Hostess with the Leastest Room’
Having made an impact here in Chicago within the Meetup.com scene, a full page, color article was written about my active culinary group, What’s Cookin Chicago. It was just an honor to be recognized in the 8th largest newpaper in the country!

October 11, 2008 – ‘We Came to Party’
A popular newspaper publication here in Chicago is the Red Eye. I was featured in the paper where I shared some ways to make gathering with friends fun and different.

December 18, 2008 – Yeast Fears Conquered!
Thanks to Bridget of The Way the Cookie Crumbles, she helped me get over my yeast issues and now I’m more confident working with yeast!

There are others I’d love to mention including the countless local events I continue to host for What’s Cookin Chicago, my travels around the country to meet fellow food bloggers and readers, the amazing recipes I’ve tried and shared by friends, etc. I look forward to another thousand posts where I hope to continue learning, growing, and refining my skills in the kitchen.

In honor of my 1000th post, I’d like to celebrate with a giveaway different from the Foodie Freebie Friday events I host. Every kitchen must have a solid dutch oven, especially during the winter. One lucky reader will receive a Lodge Color Enameled Cast Iron 6-quart Dutch Oven in one of the following colors of their choice! 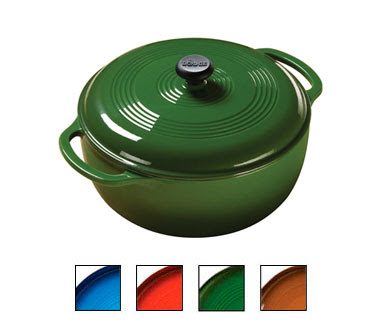 Do you have some dutch oven recipes you’ve been meaning to try? Here’s how you can get your hands on a new Lodge Color Enameled Cast Iron 6-quart Dutch Oven:

To enter the giveaway, leave a comment about:
– What do you hope to see in the next 1000 posts on Joelen’s Culinary Adventures? Are there things you’d like to continue such as blogging events? Giveaways? Other kinds of culinary adventure ideas? I’d love to hear your constructive (yet positive) feedback, since it is a celebratory post after all!

Winner will be randomly chosen by Random.Org’s Interger Generator based on the number of your comment and will be announced on Friday, January 23, 2009. Good luck!