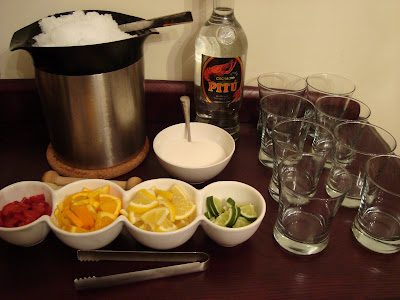 For our Brazilian Carnival dinner, I prepared a Caipirinhas bar for my guests to enjoy. The following was taken from DonaBrasil:

Caipirinha is the best known Brazilian drink. Brazil’s national cocktail is made of cachaça, sugar, limes and ice. Cachaca is a distilled alcoholic beverage made of sugarcane. 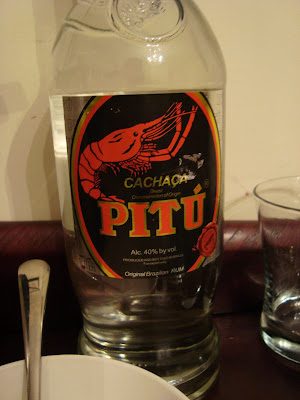 Ingredients for one glass of caipirinha

Preparation
Cut a lime into pieces and put these in a flat-bottomed glass. Add one or two spoons of sugar (Brazilians like it probably sweeter than you do). Crush the lemon with a pestle or a spoon to release its juice. Add the ice cubes. Some people like to crush the ice before adding, others simply add the whole ice cubes. Add the cachaça while mixing until the lemon and the ice cubes are just covered.

Caipivodka? Caipifrutas?
Two popular variations on caipirinha are caipivoda or caipiroska and caipifrutas. If you replace the cachaça with vodka, you’ll have a drink called caipivodka or caipiroska.

If you make a caipirinha with other fruits then lime, you will have a caipifrutas.