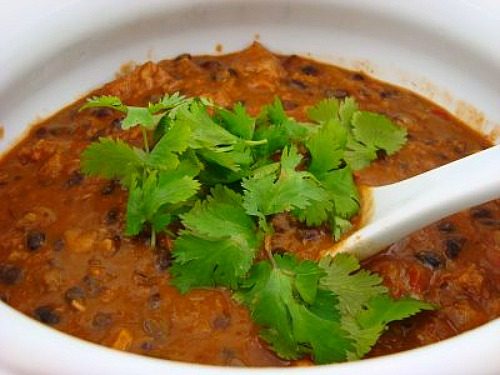 For our Brazilian Carnival dinner, I prepared the following recipe to share. This happens to the Brazil’s national dish and so it had to be part of our Carnival celebration! I included some history and information on feijoada after the recipe:

Cut the pork and the chorizo into small pieces. Sauté the garlic and the onion in a dutch oven. Add the chorizo and fry until lightly browned. Add the rest of the meat and the bay leaf and fry it well.
Add your beans to the onions in the frying pan. Add the pork stock. Bring to a boil and allow to simmer until your liquid thickens because of the crushed beans. Season with salt and pepper. Serve with rice.

The feijoada is served by putting the pot, the rice and the side dishes on the table.
Always serve with rice. Common side dishes are farofa, couve mineira, and orange (Peel the oranges and cut into thin slices. Arrange the slices on a plate).
Variations
Originally, feijoada was made with more types of meat than presented above. You can make variations on this recipe by using other ingredients, depending on the availability and on your taste.
A kind of meat that is often used is carne seca. This is salted and dried beef. You can use this to replace the beef in the recipe. Desalt the carne seca by soaking it in several changes of water for about 3 hours before you use it.

Feijoada is often called the national dish of Brazil. It is a delicious stew made of beans and various types of meat. It is eaten with white rice and side dishes like farofa and couve mineira. As feijoada contains a lot of fat, it is often eaten with slices or pineapple or orange. Feijoada is eaten on a number of different occasions, for example on parties or during the weekend. In many restaurants, feijoada is served daily at lunch time.

Traditionally, every part of the pig was used for feijoada, including the tail and the trotter. For this reason, it is a common belief that feijoada was invented by slaves who gathered the scraps from the mansion. However, the people who lived in the time of slavery had a taste that was quite different from the taste of today. Those parts of the pig were in fact appreciated and were eaten by the upper-class as well. Slaves ate a cheaper diet based on cassava flour. The legend that feijoada was invented by slaves is probably based on the history of farofa, another popular Brazilian dish made of different kinds of baked ingredients in toasted manioc flour
The French eat Cassoulet, a stew made of white beans. A Spanish dish called Cocido Madrileño is made of chickpea. Portugal has a number of bean stews that are comparable to feijoada. And a good Italian Cassoeula is made with pig trotters and pig ears as well. The Brazilian feijoada is most likely a descendent of one or more European dishes that were made in Brazil with the native South-American bean species.
To the dismay of purists, many Brazilians no longer use pig ears and pig trotters. An advantage of the use of nobler meat is that it lowers the fat content of the feijoada. The original feijoada in which all parts of the pig are used is called feijoada completa (‘complete feijoada’) to distinguish it from the contemporary variants of the national dish. Our recipe is describes a modern feijoada but we included a number of variations for making a feijoada completa.– DonaBrasil