Rick Bayless had a spell on me. He’s a well-known chef here in Chicago who not only owns quite a handful of some amazing restaurants but also has a fabulous cooking show called, Mexico – One Plate at a Time. Specifically, I caught the following episode on Create TV over the weekend (description from Create TV):

Taquisa for Ten – Episode #605
From street stalls to bustling taquerias and morning to midnight, tacos are Mexico’s favorite mini-meal-a few blissful bites of something thrillingly savory, wrapped in a soft, fragrant tortilla. And it turns out they’re also a perfect party food. Rick and his daughter, Lanie, plan a backyard taquisa-a taco buffet centered around one of the greatest taco fillings of all, Michoacan-Style Pork Carnitas, chunks of pork, slowly simmered in oil until they’re crisp and golden on the outside and succulent inside. Rick shows us how it’s done in Mexico in giant copper cauldrons, and then brings that idea home with the help of a surprising, cooking device-a turkey fryer…. 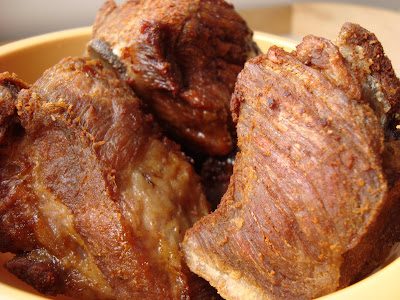 Ever since that episode, I had pork carnitas on the brain. So for dinner, I gave in to my cravings and made pork carnitas for dinner. Unlike Rick’s episode, I didn’t have a crowd to feed so I scaled down portions enough for 2 and leftovers for tomorrow’s lunch. From his show, Rick Bayless prepared carnitas so simply that resulted in delicious and succulent pork. I used a little bit of his technique and went about making carnitas… 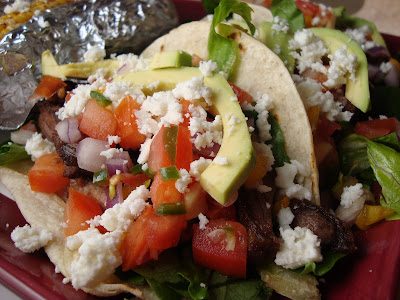 When you’re ready to make your carnitas, prepare your dutch oven filled half way with canola oil and heat until you reach about 300 degrees. Carefully place your seasoned pork in the hot oil. the oil will lower in temperature due to the pork. Allow the pork to cook in the oil for about 30 minutes, turning to brown all sides. Remove the pork from the hot oil.

Allow the oil to heat up to 325-350 degrees. Carefully re-fry the pork in the hot oil until it crisps up. Remove the pork from the hot oil and allow to drain on paper towels or cooling rack.

To serve, slice up and fill your corn tortillas along with your favorite fillings.

I served my pork carnitas over a bed of romain lettuce with fresh tomato salsa, crumbled queso fresco and sliced avocado. As a side, I prepared Roasted Cinnamon Chipotle Corn. 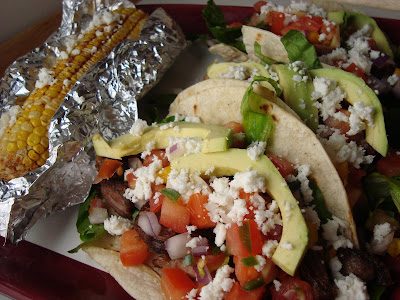