A week or so ago, my friends at See’s Candy sent me a wonderful box of Victoria’s Toffee and asked if I could create something delicious using it. With so many options, I looked to others for inspiration and ideas. I’ve had cheesecake on the brain lately (primarily due to the Daring Kitchen’s recent baking challenge) so I took my cravings for cheesecake and incorporated Victoria’s toffee somehow…

Since 1921, See’s has made this famous old-fashioned toffee from a secret recipe that combines real butter, sugar, and plump whole almonds on the inside, and See’s creamy milk chocolate and chopped almonds on the outside.

So what happens when you combine cheesecake and toffee? Well in this case, Almond Toffee Cheesecake Bars! I had some amaretti cookies left over from the Chocolate Amaretti Torte I made not too long ago which needed to get used up. Considering Victoria’s Toffee was chock full of almonds inside and out, I figured a cheesecake crust made with amaretti cookies would work nicely. For the cheesecake filling, a simple mixture of egg, sugar, cream cheese and a splash of vanilla would carry the chopped toffee bits without being too overly sweet. 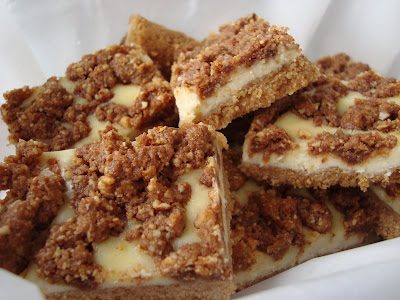 Preheat your oven to 325 degrees.

Line an 8×8 in baking dish with parchment paper and spray with cooking spray.

Place the sugar, cinnamon, and cookies in a food processor and pulse until you have a consistent mixture. Add the melted butter to the crumbs and process again until it’s all incorporated.

Pour the crumb mixture in the prepared baking dish and bake in the preheated oven for 10-12
minutes. Remove from the oven and allow to cool slightly. 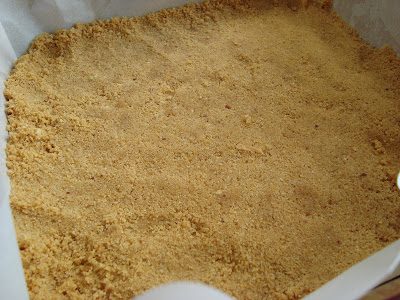 Going back to your food processor, place your toffee candy and process to a crumbly mixture. Sprinkle this processed toffee mixture over the top of the cheesecake filling. 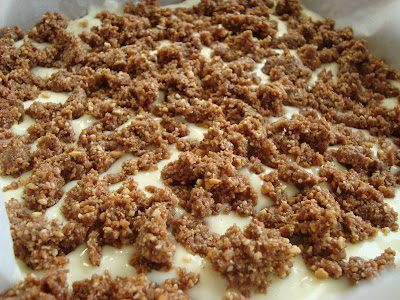 Bake in the 325 degree oven for 30-35 minutes. Remove from the oven and allow it to cool to room temp, then refrigerate for at least 2-3 hours before serving. 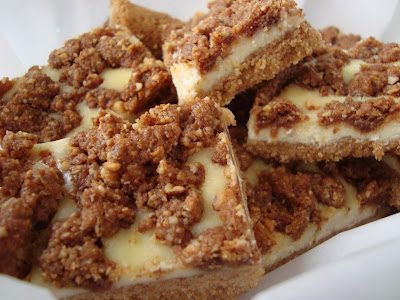 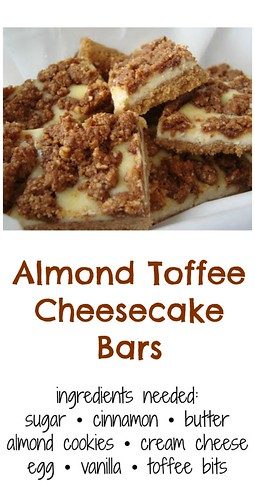