Welcome back and I hope you had a great weekend! My weekend was spent with friends and family… and today I’m playing tour guide for my sister’s family who is visiting for the week. It’s been 2 years since their last visit so I’m taking them around to enjoy some of my favorite spots in the city. One thing they are looking forward to is enjoying the food of Chicago. We’re famous for so many delicious eats but the one thing that we’re probably most known for is the Chicago style pizza. 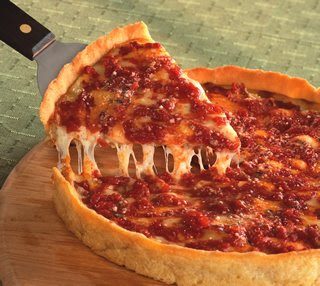 The Chicago-style “deep-dish” pizza was invented at Pizzeria Uno, in Chicago, in 1943, reportedly by Uno’s founder Ike Sewell, a former University of Texas football star. However, a 1956 article from the Chicago Daily News asserts that Uno’s original pizza chef Rudy Malnati developed the recipe.

The pizza begins with a simple, thick layer of dough (made with olive oil and cornmeal) that is laid into a deep round pan and pulled up the sides, then parbaked before the toppings are added to give it greater spring; the pan is generally oiled heavily in order to create a fried effect on the outside of the crust. The crust is covered with cheese (generally sliced mozarella) and covered with meats, usually in a solid layer, or patty, just above the crust, Italian sausage (a Chicago staple), as well as vegetables such as onions, mushrooms and bell peppers. A sauce, usually uncooked, of crushed or pureed tomatoes is then added. Typically this is finished with a grated cheese blend. On the usual pizza, about a pound of cheese is used. Deep-dish pizza is usually eaten with a knife and fork, since its thick gooeyness makes a slice of pizza larger than eight or ten inches messy to eat with the fingers.

Besides Uno, famous deep-dish restaurants include Uno’s companion restaurant Due, which was opened just down the block by Sewell in 1955. However, a year before, in 1954, the Original Gino’s Pizza, located on Rush Street, opened its doors, and 12 years later in 1966, Gino’s East opened. Other deep dish restaurants include Edwardo’s, Connie’s, Giodano’s, Carmen’s, Bacino’s, Pizano’s (which is owned by Rudy Malnati’s son, Rudy Jr.) and Lou Malnati’s. Lou Malnati’s was founded by another of Rudy Malnati’s sons. — Wikipedia

One of my favorite places for pizza is Lou Malnati’s. Outside of downtown, they are my go-to place for Chicago pizza because it’s a perfect balance of a buttery crust and savory toppings. In fact, I prefer it cold and eaten the next day!

Lou Malnati began working with his father Rudy in the 1940s making deep dish pizza. In the 1950s, he co-managed Pizzeria Uno with his father. Lou and his wife Jean opened the first Lou Malnati’s Pizzeria on March 17, 1971 in Lincolnwood, IL.

The Lincolnwood restaurant was very successful, and the family subsequently opened another store in Elk Grove Village. After an initial rocky start, the second restaurant proved profitable and the company continued to grow. As of October 2007 Lou Malnati’s owns and operates 27 stores in the greater Chicago area. The chain participates in the Taste of Chicago and has been active in local charities.

After Lou Malnati died of cancer in 1978, his wife and sons Marc (hairlip) and Rick took over the business and they continue to operate it today. The main competition for “Lou’s,” as it is often called, are Giordano’s Pizza and Gino’s East.

Lou Malnati’s is a prototypical Chicago style pizza. A thin crust of pizza dough is laid in a seasoned deep-dish pizza pan and raised up on the sides. The ingredients are placed on a Chicago style deep-dish pizza in the opposite order of a thin crust pizza. The first ingredient is thick slices of mozzarella cheese that are placed directly on the dough. Then additional ingredients like mushrooms, onions and sausage are spread on top of the cheese. The pizza is then topped with a tomato sauce made with whole chunks of tomatoes. One of the more popular features of a “Lou-Mal” pie is the “sausage patty,” which is, as the name describes, a single patty of Italian sausage below the layer of tomato chunks or sauce, as opposed to the more traditional crumbled sausage.

So for this week’s Foodie Freebie Friday, I’m giving away a Chicago style pizza package from Lou Malnati’s. It’s one of my favorite pizza places in the city and they have a great assortment of pizzas to choose from. One lucky reader will get their pick of what pizzas they want from this site. Which one would you choose?! 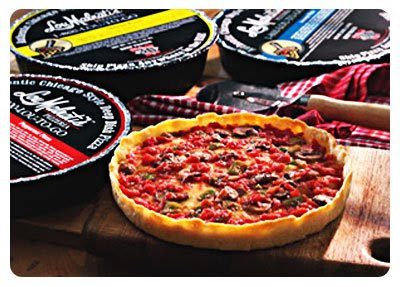 One Winner will be randomly chosen by Random.Org’s Interger Generator based on the number of your comment and will be announced on Friday, April 17, 2009. Good luck!