For April’s Chef Spotlight dinner event, we’re highlighting vegetarian and vegan chefs. I prepared this dish for the dinner and the recipe comes from Chef Sarah Kramer. I especially loved this pesto and think adding grilled chicken would be great if you wanted a non-vegetarian dish. 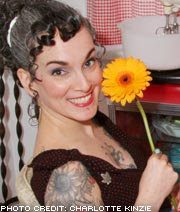 Sarah Kramer’s professional cooking career vegan when she whipped up a “zine”—typically a small, self-published magazine—filled with recipes to give as a Christmas present to her family and friends one year. Her zine took off and evolved into How It All Vegan, the bestselling cookbook that won a VegNews award for best cookbook in both 2003 and 2004. Following the success of her first cookbook, which is often referred to as “the vegan bible,” the vegan goddess with a vintage style and relaxed approach to cooking created two more tantalizing tomes: The Garden of Vegan and La Dolce Vegan.

A self-taught chef who inherited her adventurous approach to cooking from her parents, Sarah said she believes that veganism is not just about food, but is a positive, compassionate lifestyle choice. Living by the philosophy that it only takes one tiny spark to start a fire, she boasts that she has a pack of matches and is ready to burn! When not testing new recipes—or running a tattoo shop with her husband, Gerry—Sarah conducts live cooking shows at events throughout North America, pens a regular column for Herbivore magazine, and runs GoVegan.net, a popular vegan Web site. She has been a guest on TV shows including Canada AM and W-5 as well as many radio shows on stations like National Public Radio and the Canadian Broadcasting Corporation. 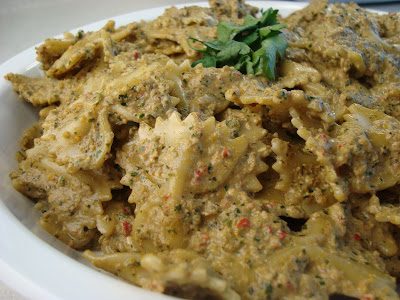 In a large pot of salted water, boil the pasta.

Meanwhile, in a food processor or blender, blend together the peppers, walnuts, basil, parsley, and garlic. 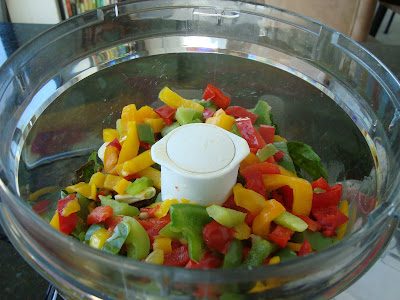 Slowly add the olive oil, while processing, until well mixed. Set aside. 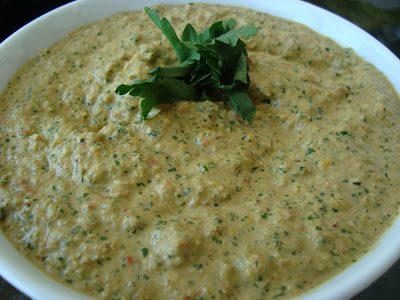 Drain and return the noodles to the pot. Add the pesto and toss together well. Serve immediately.