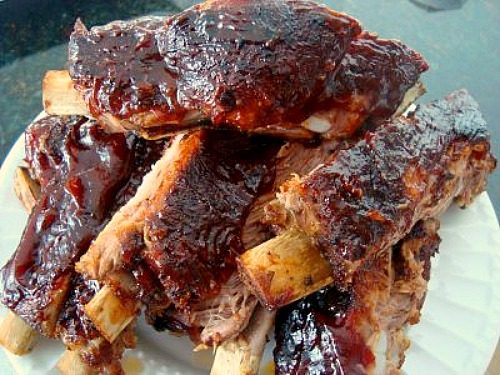 What is a Memorial weekend holiday without some BBQ?! Because it was a bit cold out to grill on our rooftop deck, I baked some pork ribs instead. Although it lacked that nostalgic grill flavor, it was still pretty delicious and there’s no leftover rib in sight. The following is how I normally prepare ribs in the oven, which is a technique I learned from my parents. Essentially, it involves using a dry rub, wrapping the ribs in foil and baking it at a low temperature for hours. After the ribs have fully baked, BBQ sauce is brushed on the top and broiled until the sauce caramelizes… and extra BBQ sauce is brushed again before it’s served.

Combine the spices in a bowl and sprinkle the rub generously on both sides of the pork rib slab.

Wrap the seasoned pork ribs in foil completely to make a packet for it to bake in.

Place the wrapped pork on a baking sheet and into the preheated oven; bake for 2 1/2 – 3 hours.

Remove the pork ribs from the oven; turn on your broiler.

Carefully remove the pork ribs from the foil packet and place on your baking sheet.

Warm your preferred BBQ sauce and liberally baste the top of your cooked pork ribs.

Place your BBQ sauce glazed ribs into the broil and allow it to broil for 5-7 minutes or until the BBQ sauce caramelizes.

Remove the pork ribs from the broiler and allow it to rest before cutting.

Baste the pork ribs with more warm BBQ sauce if you’d like or serve it along side as a condiment.

Cut the slab into individual ribs and serve warm.