For my French Cocktail Hour party, I prepared the following recipe. What French party would be complete without a chocolate mousse for dessert? This recipe was found on David Lebovitz’s site and the recipe was originally Julia Child’s. If there was anyone that knew French cuisine well, it was Julia Child! 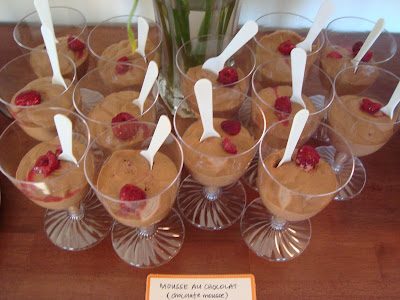 1. Heat a saucepan one-third full with hot water, and in a bowl set on top, melt together the chocolate, butter and coffee, stirring over the barely simmering water, until smooth. Remove from heat.

2. Fill a large bowl with ice water and set aside.

3. In a bowl large enough to nest securely on the saucepan of simmering water, whisk the yolks of the eggs with the 2/3 cup of sugar, rum, and water for about 3 minutes until the mixture is thick, like runny mayonnaise. (You can also use a handheld electric mixer.)

3. Remove from heat and place the bowl of whipped egg yolks within the bowl of ice water and beat until cool and thick, as shown in the photo above. Then fold the chocolate mixture into the egg yolks.

5. Fold one-third of the beaten egg whites into the chocolate mixture, then fold in the remainder of the whites just until incorporated, but don’t overdo it or the mousse will lose volume.

6. Transfer the mousse to a serving bowl or divide into serving dishes, and refrigerate for at least 4 hours, until firm.