I made the following recipe to accompany the various sausages we made for my recent sausage making class. I scored some great deals at the grocery store on bell peppers of all colors – red, yellow, orange, and green – and wanted to use them somehow. On the same trip to the grocery store, russet potatoes were also on sale so I decided on a potato salad that included the bell peppers. To round it out further, I added some cheese and salami. It’s a great potato salad on its own or makes for a nice accompaniment, especially during the summer cookout season. I’m not a big fan of tons of mayo so this recipe only calls for 2 tablespoons. 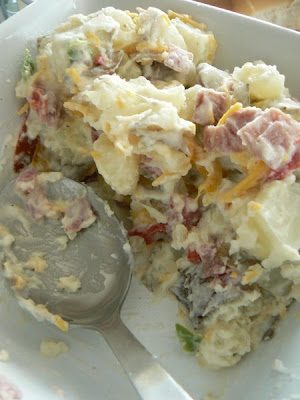 Cut your potatoes into 1 inch pieces (your choice if you want the skins on or off – I kept mine on) and place them in apot with filled water. Place the pot over a medium high heat and allow the potatoes to boil and soften. Once cooked, drain and place potatoes in a large bowl; set aside to cool.

Prepare your bell peppers by cleaning, deveining and seeding them. Finely dice your peppers or if you prefer, in short strips. Place the peppers in a large bowl with the potatoes.

Add the remaining ingredients and combine. Potatoes can either be warm or cold, since this potato salad can be served either way.