For my French Cocktail Hour party, I created and prepared the following recipe. This dish satisfies two goals of mine… to prepare a French dish to add to my French inspired menu and also to prepare a dish using a special sausage, courtesy of Marx Foods. The result? A successful and delicious recipe that meets both goals that my guests enjoyed!

Over a week ago, Marx Foods had a fun blogger recipe challenge asking for fellow bloggers to leave a comment with an original recipe idea using fine game sausage. Eleven bloggers who left comments were chosen and sent a random package (4 links) of one of Marx Food’s following fine game sausage:

The chosen bloggers had about a week to develop their original recipe and have their creations voted on. What’s the prize for all this culinary creativity? A Wild Game Sausage Sampler will be awarded to the blogger with the most votes for their dish!

I was one of the eleven bloggers that was chosen to take on the Marx Food’s Game Sausage Blogger Recipe Challenge. Before I knew it, I had 4 links of their Wild Boar Sausage with Cranberries & Shiraz Wine to use. The first thing that came to mind was pizza… and who doesn’t love pizza? However, I wanted to come up with something different and more creative to really showcase the sausage and it’s versatility in recipes. 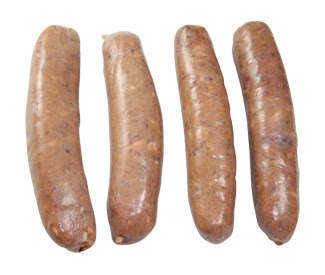 Wild Boar Sausage with Cranberries & Shiraz
This wild boar sausage has a nutty, pork flavor with a note of cranberry that imparts a slightly sweet taste to the meat.

Given the flavors of this game sausage, other ingredients that I thought would pair nicely included dried cranberries, gorgonzola cheese, spinach, toasted walnuts, balsamic vinegar and caramelized onions. With this list of ingredients, there were a myriad of recipe ideas I could make but I wanted something elegant for my French Cocktail Hour party.

In preparing my French Cocktail Hour party menu, I looked to classic French fare and also menus of some French restaurants here in Chicago. One French restaurant I visited last year was Bistro Margot, where I enjoyed a delicious brunch of Pomme de Terre Farci. This dish consisted of potato shells stuffed with scrambled eggs, cheddar cheese, and crispy bacon topped with horseradish crème fraiche and scallions. It was a great dish that inspired me to recreate it on Christmas morning last year. So I’m using the same concept of stuffed potatoes and including the Wild Boar Sausage in my recipe.

Here is my entry for the Marx Food’s Game Sausage Blogger Recipe Challenge. Stay tuned, because Marx Foods will be opening up their voting polls all next week from June 8th to June 12th, where my entry will be up against 10 others using their wild game sausage. The blogger/recipe with the most votes will be a wild game sausage sampler… which I hope to win and celebrate with a big wild game sausagefest! 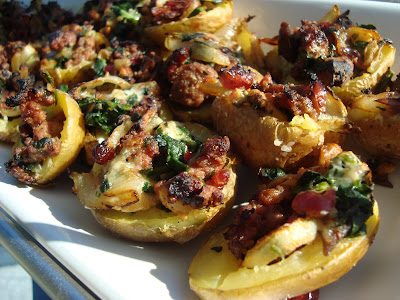 In a small sauce pan over medium high heat, add the balsamic vinegar and allow it to boil and reduce down to 1/4 cup. Once reduced, add 1 tablespoon butter and set aside. This will serve as a balsamic drizzling sauce to finish off the dish.

Preheat the oven to 425 degrees.

Prepare your potatoes but scrubbing and patting them dry. Coat the outside of the potatoes with a bit of olive oil and place on a baking sheet. Sprinkle with sea salt and bake for 20 minutes. 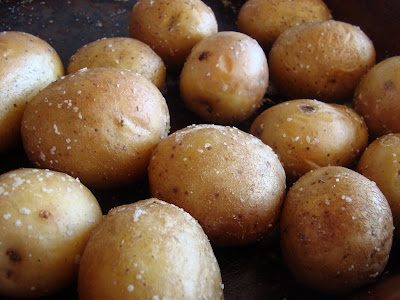 Remove potatoes from the oven and allow to cool slightly before slicing them in half lengthwise. Carefully scoop out the insides to create a “boat” for the stuffing to sit in. Place in a mini muffin pan, brush with melted butter and set aside. Keep the oven on, as the potatoes will get baked a second time after they are stuffed. 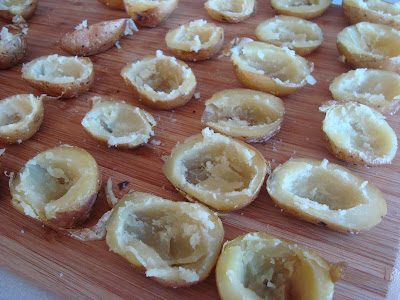 In a large saute pan over medium hight heat, place the extra virgin olive oil, minced garlic and sliced onion. Saute the onions until it caramelizes, roughly 15-20 minutes. Place the onions in a large bowl along with the remaining ingredients except the sausage and set aside. 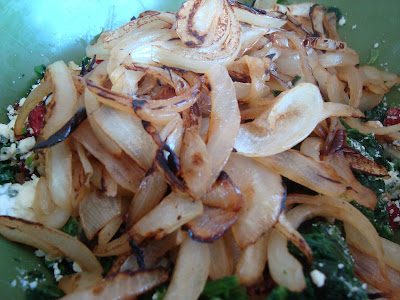 In the same saute pan over medium high heat, remove the wild boar sausage from it’s casings and crumble it into the pan. 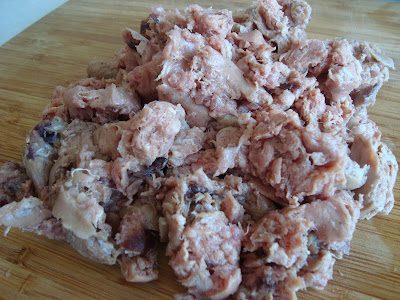 Cook the sausage until browned and add it to the bowl with the remaining ingredients. Toss to combine to make the stuffing. 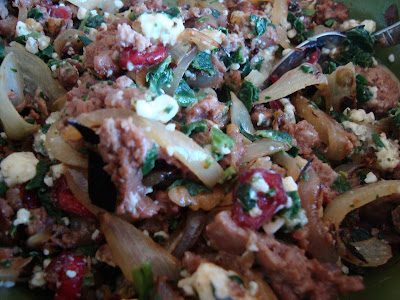 Carefully spoon the stuffing into the potatoes and place on the baking sheet. When all the potatoes have been filled, bake them in the preheated oven for 15-20 minutes, until stuffing melts and potato tops turn slightly golden. 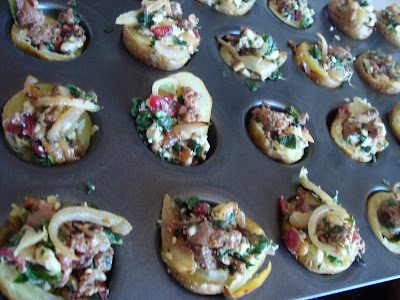 Remove from the oven and allow to cool slightly before placing on a serving platter. Once on the serving platter, drizzle the balsamic reduction prepared earlier over the potatoes as a finishing sauce. Serve warm and bon appetit! 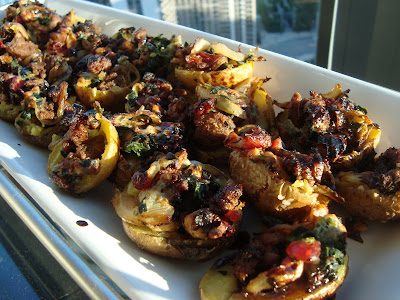