Ah… a Foodie Freebie Friday announcement right after a holiday weekend is most likely to come late… and so here I am! It’s been quite an eventful weekend and I hope you had a wonderful time enjoying festivities in the U.S. for Independence Day! We started our celebrations on Friday, July 3rd and continued onto the rest of the weekend… where today was a day for us to get some rest and catch up!

Now that we’re back, energized and ready for the week (albeit late!), this week I’m giving away one of my favorite desserts… cheesecake! But of course, it can’t be just any old cheesecake. My ultimate favorite is Eli’s Cheesecake, which started right here in Chicago! Last week I had the pleasure of meeting Eli’s Cheesecake President, Marc Schulman and his daughter Elana. We had a fabulous time at the Taste of Chicago and it was a great opportunity to hear about their company and family history… 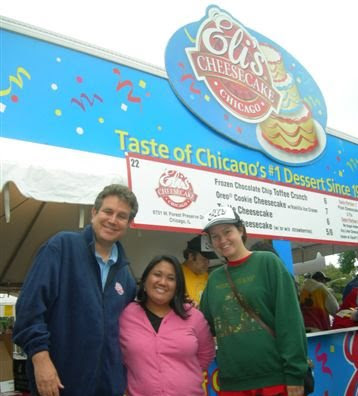 Marc Schulman has not forgotten his formative years growing up in the restaurant owned by his parents, Eli and Esther Schulman, longtime operators of Eli’s The Place for Steak in Chicago’s Streeterville neighborhood. Working in that restaurant, which closed three years ago after a nearly 40-year run, shaped Schulman’s values about running a business in the best interests of both customers and employees.

Eli’s, which opened in 1966, was well-known in its day as a gathering place for upwardly mobile Chicagoans and visiting celebrities. Beginning as a steakhouse with some Jewish deli favorites, Eli’s menu evolved to include lighter items but always sold a lot of its special desserts.

The late Eli Schulman developed his signature cheesecake as the house dessert for the restaurant. Though he wanted to have a product that was so good that other restaurateurs would buy it to serve to their customers, he never dreamed that the cheesecake business would become as big as it has. Today, 15,000 Eli’s cheesecakes are made daily in more than 100 variations and sold all over the United States and in some foreign countries.

Eli Schulman’s son, Marc, runs the cheesecake manufacturing business but keeps his hand in restaurants by overseeing the Cheesecake Cafe, open for breakfast, lunch and catering functions at the facility. — BNet

To celebrate this favorite dessert, a lucky reader will be receiving their choice of a cheesecake sampler to enjoy, compliments of Marc Schulman himself. Thank you Marc for your generosity! I encourage you to definitely check out the Eli’s Cheesecake website to learn how much the company has not only touched many with their delicious cheesecakes, but also how they have helped the community with the various outreach programs they have in place. If you happen to visit Chicago, do make that special trip out to Eli’s Headquarters where you’ll be able to take a tour of their site and enjoy a meal at their cafe for lunch and dinner. One of my favorite events at Eli’s is their annual Cheesecake Festival that happens in the fall. Stay tuned as I will venture out later this year for another culinary adventure with Eli’s! A lucky reader will get their choice of one of the following cheesecake samplers: 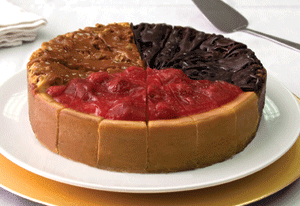 Some guidelines:
– Giveaway is only for those who live in the United States – my apologies to my international readers!
– You must have a valid email address (within your comment or blog link) so that you can be contacted if you win.

ONE WINNER will be randomly chosen by Random.Org’s Interger Generator based on the number of your comment and will be announced on Friday, July 10th, 2009. Good luck!