It’s taken me some time to post some exciting news… but for those who haven’t been following along these past few weeks, here’s a recap!

Chicago RedEye is a popular newpaper publication here in Chicago, which you will often find at any train and bus stop, along with various coffee shops and city corners. It’s the paper most folks will grab to read on their daily commute. A few weeks ago, Chicago RedEye introduced a special feature event called, RedEye’s Virtual Kitchen Stadium Cookoff. Over the course of four weeks, 8 selected home cooks (which you can read about here & here) within Chicago battled it out Iron-Chef style in various cooking challenges with secret ingredients.

For each challenge given, these cheftestants were to 1) create an original recipe for the culinary challenge; 2) provide an explanation of their dish; and 3) submit a photo of their dish. A secret ingredient and challenge was announced at 10am on our competition days and our submissions had to be in by 8pm later that same day. Each of the submissions were reviewed by Chicago’s very own celebrity chef, Chef Rick Bayless. Due to the virtual nature of the cookoff competition, no tastings were conducted by Chef Bayless… so it was the photos of our dish that helped determine the winner, in addition to his reviews and notes of our original recipes and explanations.

Round 1: Savory Cherry Challenge – Four cheftestants were asked to create a savory dish using fresh cherries. I was fortunate to make the cut and move into the “semi-finals” with my Savory Triple Cherries Jubilee… 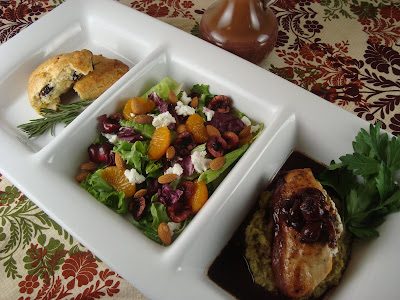 Round 2: Savory Tamarind Challenge – The four remaining cheftestants were asked to create a savory dish using tamarind. I didn’t participate in this round, however I would have loved to since tamarind is a familiar ingredient in my kitchen! Two more cheftestants join me in the semi-finals.

Round 3 Semi-Finals: Vegetarian Dish with Alcohol Challenge – The four cheftestants that made it into the Semi-Finals were asked to create a vegetarian dish involving any alcoholic beverage. Some drama ensued as Chef Rick Bayless called a tie between my competitor and me, leaving the public to decide. With the help of supportive friends, I made it through once again into the Finals with my Artichoke, Mushroom & Leek Mille Feuille… 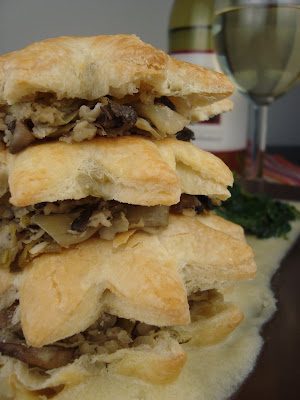 Round 4 Finals: Ethnic Dish with Mint Challenge – The final two cheftestants remain standing and to add more pressure, a wildcard cheftestant (who had the popularity vote) joined us. For the last and final round of the competition, three specific Chicago neighborhood streets were chosen and assigned to each cheftestant. The challenge was to create a dish representative of the ethnic neighborhood streets assigned, while hightlighting fresh mint.

So who reigns supreme in RedEye’s Virtual Kitchen Stadium?… Yours truly! I was assigned the vibrant street of Devon Ave. where Indian and Pakistani cuisine and culture are very dominant. I was thrilled to have this challenge since I knew the area well and hoped to pay homage to the delicious dishes found there. With that, I created my recipe for Pudina Raita Chicken… 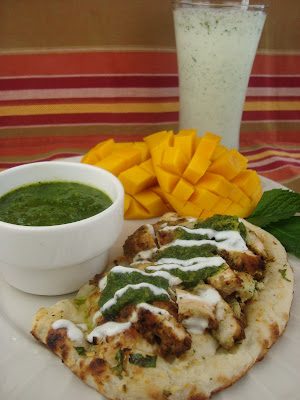 For fellow Chicagoans, I will be cooking my final winning dish live on WGN’s Midday News on Thursday, July 30, where you can get a sneak peak of me in action at 12:15pm and 12:40pm… and I’ll be talking about RedEye’s Virtual Kitchen Stadium and my recipes along with Chef Rick Bayless around 12:45pm. If you miss it on tv, you’ll be able to view the news clip on WGN’s online website.

Thank you to all my friends, family and supporters… and even bigger thanks to my fellow cheftestants who all did a great job highlighting their culinary talents in the dishes they prepared. Stay tuned as I’ll be hosting a RedEye Virtual Kitchen Stadium Potluck with my fellow cheftestants in a couple of weeks, where we will all be creating a Rick Bayless dish to share in honor of our celebrity guest judge.

Have a wonderful weekend and on Monday, July 27th, we’ll commence with our weekly Foodie Freebie Friday!