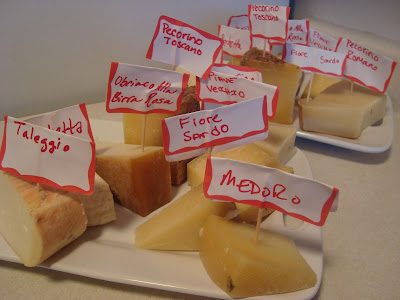 One of the new monthly events I’m hosting for What’s Cookin, Chicago are my ‘Cheese Please!‘ tastings. Each month we get together, bring a cheese specific to a region or country, and learn more about them through a tasting. This month we focused on Italian cheeses. 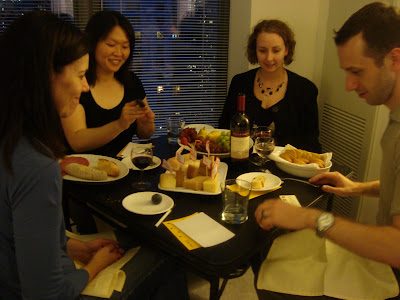 Italian cheeses are some of the oldest in the world. There is record as early as 25 B.C. about the role cheese played in the diet of Roman soldiers. Cheese was a staple in the diet historically, and is still important in Italian cuisine. Many cheeses today are prepared just as they have been for centuries and there are even laws enforced regarding cheese. Italy has enacted name-control laws to protect the names, origins, and characteristic of more than twenty-five Italian cheeses… crazy huh?! You’ll often find a Denominazione di Origine Controllata (D.O.C.) designation on some cheeses which are strictly regulated to meet legal standards for production methods, production area and physical characteristics.

Italy can be divided into regions, each with its own cuisine and cheese varieties. In Italy, most people tend to sell and eat only the cheeses of their region. They’re quite protective of their regional foods but even more so when it comes to cheese. There are also quite a few types and styles of Italian cheeses available. In our tasting session, we got to see first hand how very different Italian cheeses are from taste, smell, color and texture. 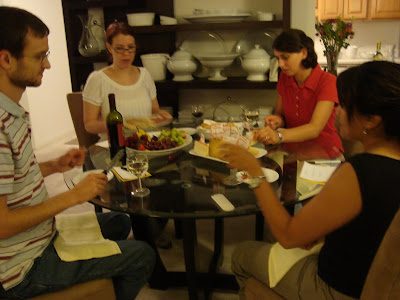 The cheeses we had for our tasting included the following:

Pecorino Rustic Medoro – This is an aged sheep’s milk cheese from Sardina, Italy where the rind is rubbed with olive oil. The texture is hard, nutty and sweet.

Fiore Sardo – This is an extremely old Sardinian cheese that’s older than the well known Pecorino Romano. Fiore Sardo was extremely popular in the 19th century when it was the only cheese to be exported from the island of Sardinia. This is an uncooked hard cheese made from fresh whole sheep’s milk. The cheese in placed into molds and is placed in a brine, then smoked and left to ripen in cool cellars in central Sardinia. As it ages, the cheese has a sharper flavor. Generally, these cheeses are only aged for a few months and enjoyed as a table cheese. If it ages for 6 months or more, the texture begins to change, allowing it to be used as a grating cheese.

Taleggio – This is a semi-soft, washed-rind cheese from the Valtaleggio region in northern Italy. It is characteristically aromatic [read: smelly, stinky] yet mild in flavor and features tangy, meaty notes with a fruity finish. The texture of the cheese is similar to French brie in that it’s soft and almost oozes on a plate and when eaten, it melts in your mouth. As much as I wanted to really like this cheese, I just couldn’t get over the aroma. It was a bit to strong for me and it wasn’t a favorite of mine.

Robiola Rochetta – This cheese comes from the Piedmont region of Italy. The texture is creamy, dense, slightly soft and smooth, mainly due to the combination of goat’s, cow’s and sheep’s milk. I found it went extremely well with strawberries. It does have a strong aromatic characteristic, but not as off putting as the Taleggio (at least, in my opinion!)

Pecorino Toscano – Remember how I mentioned that there are name controlled laws in Italy involving cheese? Well this is one of those cheeses where laws apply as it’s a D.O.C. (name-controlled). This Tuscan cheese has a firm feel, crumbles nicely and has a nutty, subtle salty flavor. I found that this goes especially well with salami.

Pecorino Romano – This is a cheese many have heard of, if not used themselves. Pecorino Romano is one of Italy’s oldest cheeses, mainly produced in Sardina, Italy and has a sharp flavor. It’s made from sheep’s milk. Did you know that “Pecora” in Italian means sheep? You may have even noticed that this cheese can be pricey. The reason for this is because sheep in Sardina only give milk for 6-7 months out of a year and the milk must be able to produce enough cheese to satisfy the public’s demand for the entire year.

Piave Vecchio – This is a cheese that similar to Parmigiano–Reggiano. It’s a hard Italian cheese that has a crumbly, almost crunchy texture but has some sweetness to it. You can taste some fruity notes which makes this a great snacking cheese. It’s generally aged for six to fourteen months. Piave is made in the mountainous Piave River Valley region of Belluno, Italy, out of cow’s milk.

Obriaco All Berra Rosa – This cheese has a unique story about it! It’s an Italian cheese made from raw cow’s milk from Veneto, Italy, which has been soaked in a red/amber beer. This was my second favorite of all the Italian cheeses in our tasting and I’ve found out I really enjoy soft, creamier cheeses more than hard ones.

To start off our Italian Cheese tasting, I prepared a simple pasta dish, using the homemade pasta sauce I made recently. Tossed with some rotini pasta, fresh chopped parsley and a generous grating of Parmesan cheese, it was a nice starter before we indulged in cheese. 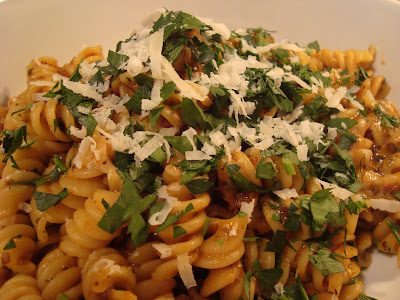 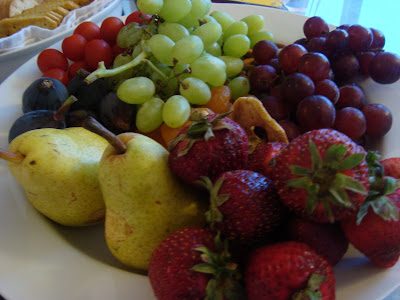 I also offered an assortment of 4 kinds of crackers, freshly toasted bread and salami. 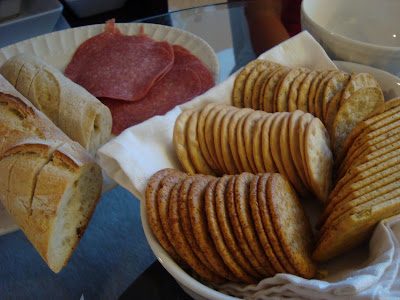 It was a great tasting where we learned about various Italian cheeses, each other and our own personal preferences when it comes to cheese. Stay tuned next month when we will be tasting our way through French cheeses! 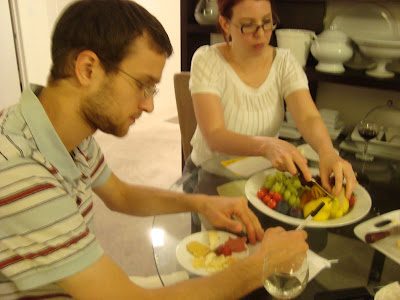