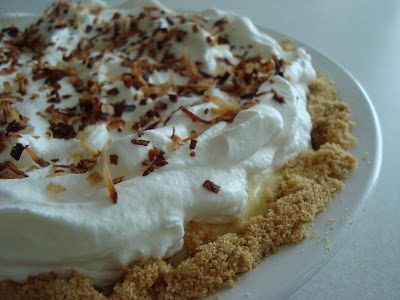 This week’s Tuesdays With Dorie baking challenge is Dorie’s Creamiest Lime Cream Meringue Pie, chosen by Linda of Tender Crumb (who has the recipe within her blog). I went and did my spin on Dorie’s recipe, only changing very little… which was adding chopped fresh mango, as suggested in her book, and topping the pie with homemade whipped cream and a garnish of toasted coconut.

The recipe was simple in theory but was more time consuming than I anticipated. It starts off with a graham cracker crust. Then here is when my patience was tested. In a bowl over simmering water, lime zest, sugar, eggs, lime juice and cornstarch are whisked to create a cream. The key part was to ensure the cream reached a temperature of 180 degrees. It seemed like it took much longer than it should have, and Dorie’s recipe indicated that it may take awhile. Needless to say, I finally got it up to temp and was happy to move on with the recipe!

The cream was strained so the rind and any pulp from the juice would be removed. The remaining cream was blended in a blender with room temperature butter to create a luxurious cream – it was heavenly (naturally, with about 2 sticks of butter!). The cream was set to cool before assembling the pie. 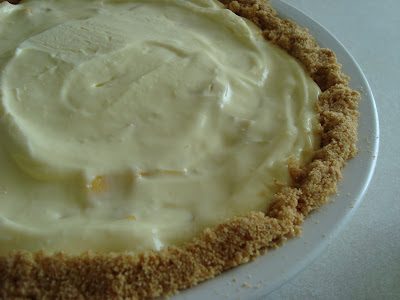 To assemble, fresh chopped mangoes were placed in the graham cracker crust, followed by the lime cream. The original recipe called for creating a meringue and broiling it for a nicely browned top. Instead, I topped it with freshly whipped cream and toasted coconut to give it a similar look. I figured with mango and lime flavors incorporated in the pie, coconut should blend in nicely and offer some textural contrast.

I would have liked to cut a slice to share a picture of it, however this dessert is coming to the picnic in the park with me later tonight… so I may update with a picture of it sliced soon!