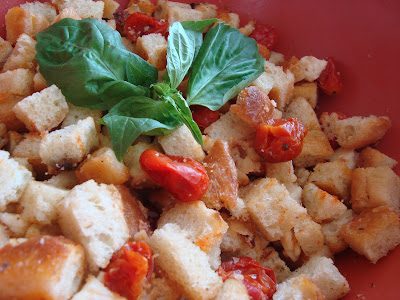 I don’t have panzanella salad very often but it’s certainly a great way to enjoy bread. Panzanella is basically a bread salad, using leftover bread. For this recipe, I prepared the all purpose dough as an herb focaccia, which was then cubed and toasted just like croutons. The result is buttery, crunchy cubes of bread, perfect for Panzanella. By adding some roasted grape tomatoes and garlic cloves, fresh basil and a homemade balsamic vinaigrette, you have a great salad to serve as an accompaniment to an Italian inspired meal. Note: the bread should not be soggy or drowned in dressing, but remain crispy and crunchy.

Prepare the batch of all purpose dough to make focaccia by rolling out the dough and let it rise. After it’s risen, make indentations on top of the dough with your fingers. Brush with melted butter and your choice of herbs. Bake at 450 degrees for 20 minutes until golden brown. Allow the focaccia to cool. Cut the focaccia into cubes and place in a large bowl.

In a large bowl, toss cubed focaccia with 1/3 cup olive oil, salt, pepper, and garlic. Lay bread on a baking sheet, and toast in the preheated oven until golden, about 5 to 10 minutes; allow to cool slightly.

In a baking dish, place the tomatoes and garlic cloves. Drizzle with olive oil and season with salt & pepper to taste. Bake in the oven for 15-20 minutes until slightly roasted. 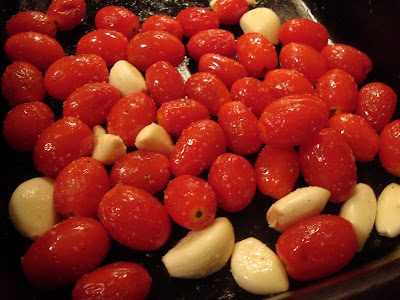 While the focaccia and tomatoes are in the oven, whisk together 1/4 cup of olive oil and balsamic vinegar.

When the focaccia has toasted and the tomatoes/garlic have roasted, remove from the oven.
Gently toss together the bread, tomatoes, basil, and crumbled fontinella cheese. Toss with the vinaigrette and let stand for 20 minutes before serving. 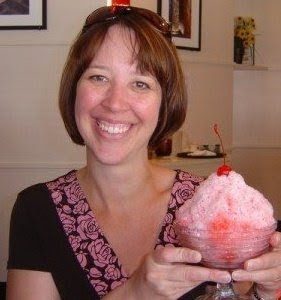 “I absolutely love bread salad and this recipe did not let me down! I loved the roasted tomatoes in the dish and the cheese was a nice balance to all of the ingredients. No one ingredient overpowered another and the taste of all of the ingredients together was wonderful! I think this is a dish that almost anyone can enjoy. There isn’t an ingredient that stands out as something people dislike often and I would definitely encourage others to make it. It’s a great dish to serve alone on a warm day or as an accompaniment to fish or chicken.” 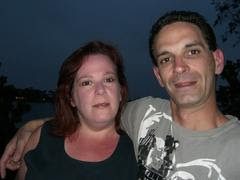 “This one confused me from the start. I wasn’t sure if I should eat it alone, as a salad, or add it to a garden salad to spruce it up. So we tried it as an appetizer, as is, out of the package. There were some wonderful flavors; I tasted Feta cheese, fresh basil, garlic, and tomato. All those flavors were very refreshing. However, the focaccia bread that was used as the base for the salad was dry. I think if I were to serve this as it were presented, I would have tossed the focaccia (which was cut into the size of large croutons) in olive oil and toasted under the broiler before being added with the other ingredients. This would have added a nice crunchy texture. After tasting it the way we received it, I then added it to a fresh garden salad. A quick toss with Raspberry Viniagrette, and we had a perfect salad. All the ingredients mixed well as a salad, and I would recommend this as a serving suggestion.” – Kevin & Marla 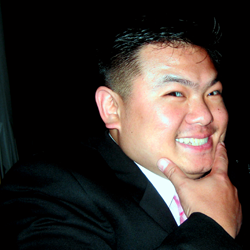 “The Panzanella Salad was hands down my favorite dish of this set because the combination of the different ingredients enhanced each other’s flavors. I would encourage others to make this dish/recipe because each forkful of tomato, cheese, garlic and bread was very refreshing. I could not stop eating it, this dish definitely made my day. If I were to make this dish/recipe, I would make the croutons smaller, increase the tomato to crouton ratio and I would definitely eat it fresh out of the kitchen.”