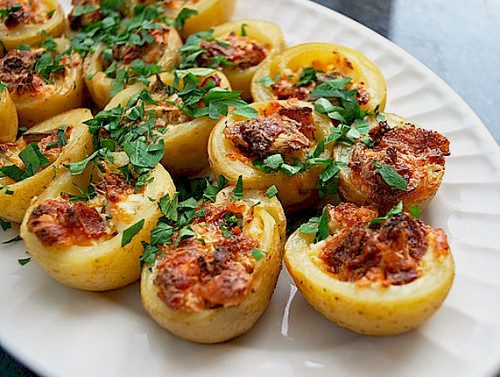 For this dish, I was inspired by 2 appetizers I enjoy – potato skins and jalapeno poppers. I like my potato skins topped with crispy bacon, cool sour cream, melted cheese and some scallions for color. What I don’t like about potato skins is how they can be pretty greasy and are too messy to eat as finger food. When it comes to jalapeno poppers, I prefer them cream cheese filled and love that they are small enough to really pop in your mouth. So to combine the two, I used small Yukon gold potatoes and filled them with a bacon and cheese mixture then baked them. These were gone very quickly, maybe too quickly. All I remember after putting them on the table was everyone sitting there, with their eyes closed and hearing “mmmmm…..” in stereo sound. 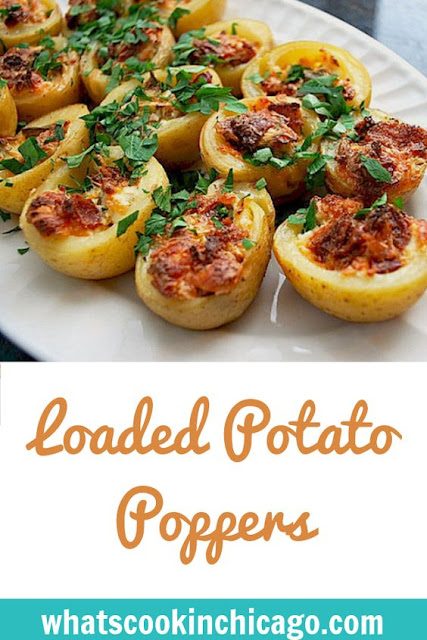 Preheat your oven to 375 degrees.

In a saucepan, add the potatoes and cover with water. Boil the potatoes over medium high heat until tender. Drain and allow to cool. When the potatoes are cool enough to handle, cut off a small piece of each end – this allows the potatoes to sit flat. With the ends cut off, cut the each potato in half, crosswise. Carefully scoop out the middles of each potato half with a melon baller. Save the scooped out potatoes to use later or for another recipe. After you repeat this with all your potatoes, you should have these little potato cups that sit flat on its bottom.

In a medium bowl, combine the remaining ingredients except for the parsley for the filling. Carefully fill each potato cup with the filling. Bake the filled potato cups in the preheated oven for 10-12 minutes, or until the filling has browned nicely. Remove from oven and allow them to cool slightly before service.