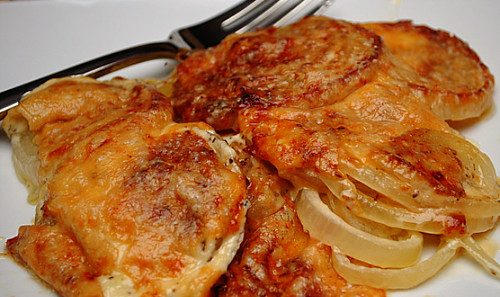 There’s a restaurant here in Chicago called Osteria Via Stato, which has a signature appetizer called Parmesan Crusted Sweet Onions. This antipasti on their menu is amazingly creamy and rich… and should be enjoyed in moderation. My friend Megan loves this dish so much (as do I) that she asked the restaurant for the recipe. Much to her surprise, the restaurant gave it to her! I guess the saying is true – “Ask and you shall receive.”

We especially like this as a side dish to steaks or any roasted meat. Using sweet Vidalia onions pairs well with the saltiness of the Parmesan cheese… and who can resist the creamy white wine sauce with hints of thyme? Be as liberal as you’d like with the Parmesan cheese. The more you choose to use, the longer you may want to keep them under the broiler to get it perfectly browned and crispy.

Megan also mentioned that another version of the recipe can be found on Closet Cooking, known as Onion Gratin.

Prepare your onions but peeling and cutting them in slices, being sure to keep entire rings. Place the sliced onions on a lipped baking sheet or baking dish. Brush with olive oil and sprinkle salt, pepper and dried thyme over them. Bake the onions in the preheated oven for 15 minutes.

Meanwhile, in a saucepan, combine the heavy cream and wine. Simmer until warm. Remove the onions from the oven and ladle the cream/wine mixture over them.

Megan also says that leaving them in the oven a little longer will result in a nicer browned crust, which is delicious!

This was originally posted back on May 25, 2009 but I’ve updated it with a new pic and some additional information. 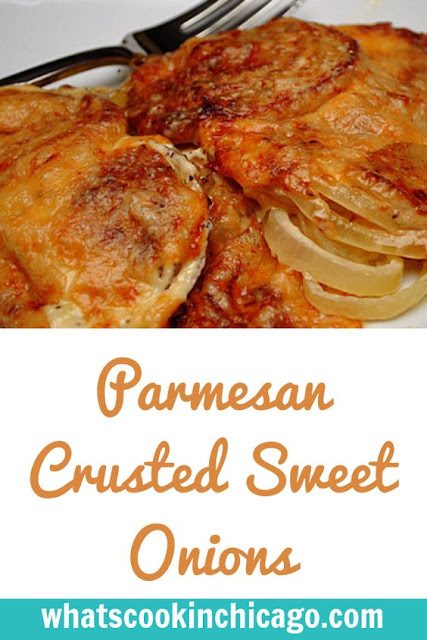