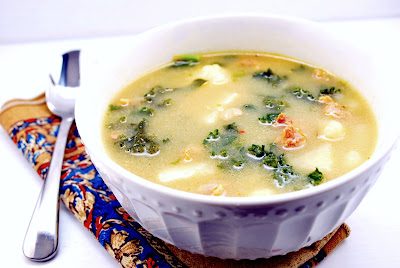 Okay, I’ll admit it… one of my guilty pleasures is dining at Olive Garden, especially during their annual ‘Never Ending Pasta Bowl’ special. I’ll also admit that I ate at Olive Garden three times in four days. Judge if you must but Olive Garden is one of those restaurants that has some meaning to me. Growing up in the suburbs, chain restaurants were plentiful and often times my family and friends we would celebrate events with a dinner out. Many of those celebrations ended up at Olive Garden.

For me, it’s kind of a comfort thing I guess. The complimentary soup or salad (I usually order salad), their breadsticks (which I find too filling and too salty) and their mediocre pasta. Sure, I could easily whip up a much better pasta dish at home, but it’s a night out friends and family enjoy together where no one has to worry about cooking or cleaning. With that said, my husband is particularly fond of Olive Garden’s ‘Zuppa Toscana’ soup. While I order the house salad, he orders this soup and every single time he orders it, he looks across the table at me and asks, “Why don’t you ever make this at home? Like really make it… just like it tastes here?” I look back at him, roll my eyes and sigh.

I’ve attempted making my own spin of Zuppa Toscana a couple years ago. He thought it was good, but it wasn’t ‘exactly like Olive Garden’s.’ So in an effort to appease my husband, here is a much closer attempt of the soup and it’s been given my husband’s seal of approval. Finally.

In a large dutch oven over high heat, add the chicken broth and bring to a boil.

While the broth is coming up to a boil, prepare the potatoes by slicing in half lengthwise and then cutting each half into 1/2 inch slices with the skin on. Set aside.

As the potatoes soften, prepare the kale by cutting away the tough core and stem. Slice the leafy greens into slices and place in a bowl.

Once the potatoes have softened up, remove from heat or turn the heat off. Stir in the kale and half & half. (The heat of the soup will cook the kale without turning it brown.)