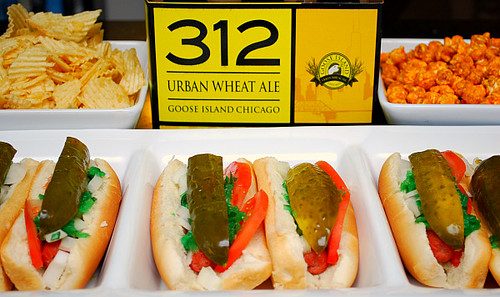 Every so often, I get an email from a fellow reader about my blog, my What’s Cookin Chicago culinary group and/or about non-touristy food stops I recommend to visitors. One of my readers, CC, informed me she was coming to Chicago to visit family who live in the suburbs and that it would be her first visit to Chicago. Our email exchanges led to phone calls and we soon developed a friendship. (Don’t you love how random circumstances bring people together?!) When CC and her family finally came to Chicago, I invited her and her family over for a Chicago inspired dinner. As much as I wanted to make a dinner from scratch, I figured it would be best to showcase some local products and talk about them a bit. To highlight Chicago, I had…

I chose to highlght Goose Island beer because Goose Island is such a popular and very good beer, in and out of Chicago. Aside from that, the brewery itself is named after the only island on the Chicago River.

It is separated from the mainland by the North Branch of the Chicago River on the west and the North Branch Canal on the east. The canal was dug in 1853 by former Chicago mayor Willian B. Ogden for industrial purposes, thus forming the island. Because he formed the island, at times, it has been known as William B. Ogden Island. After Irish immigrants moved to the island, it took on the name Goose Island as well as Kilgubbin, which was the immigrants’ original home in Ireland. The Goose Island Brewery makes Kilgubbin Red Ale, in honor of this name. – Wikipedia

C.J. Vitner’s is a Chicago company that specializes in snack food and it is one of the only continuously family owned and operated snack food companies in the country. Their commitment to their employees and customers has continued to grow over the last eighty years. 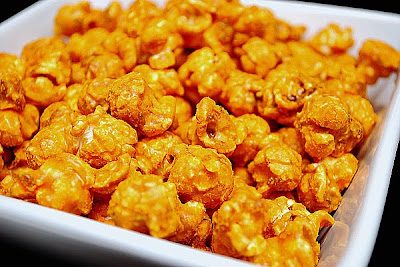 Popcorn is a serious thing in Chicago and at Garrett’s popcorn shops, the thing to do is to order “the mix” – a sweet and salty concoction of cheesy cheese and buttery sweet caramel popcorn. But ask folks in Chicago, it’s called “carmel” even though we all know it’s carAmel. I had to share this Chicago favorite with CC and her family. This popcorn mix was not from Garrett’s however. I believe the name of the shop is called ‘What’s Poppin’ and what makes this different from Garrett’s is that it’s cheesy cheese popcorn that’s been coated with caramel… or vice versa. Either way, each giant fluffy piece of popcorn is covered in both cheese and caramel. Sinfully addicting, I tell you! 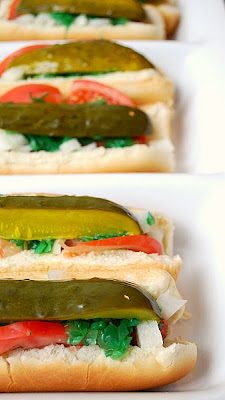 What would a Chicago inspired dinner be without a Chicago dog? I used Vienna Beef hot dogs (the only kind to use, in my opinion) which sat in a steamed hot dog bun (preferably a poppy seed bun – but I couldn’t find any nearby). Topping this dog are some chopped white onions, the signature neon green relish, slices of fresh tomato, a pickle spear and a dash of celery salt. I omitted the sport peppers (not a big fan) and one more thing – ketchup is not allowed. Yellow mustard is a go, but no ketchup must touch this dog. Ever. 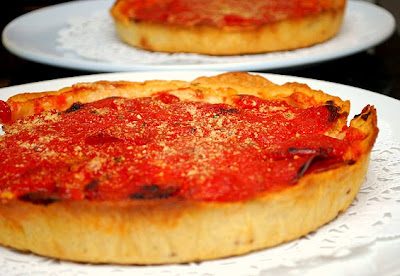 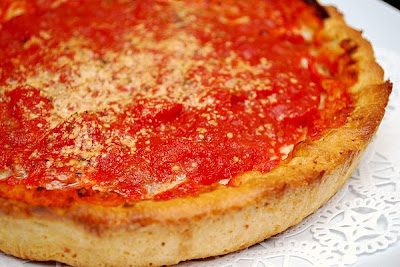 Ah, the piece de resistance. Pizza! Chicago takes their pizza seriously. Everyone tends to have an opinion on where to go for the best kind. There are countless places to choose from but for me, my vote goes to Lou Malnati’s. They tend to have a very good balance of buttery crust, hearty fillings and just the perfect amount of sauce. Now if you haven’t had a Chicago pizza before, it may not be what you expect. First off, it’s more like a savory pie, often eaten with utensils since it’s so hearty and big. Secondly, it’s baked in a pan similar to a deep cake pan and after the crust in formed, cheese is the next layer, topped with whatever toppings you’ve chosen… and the whole pie is topped with a tomato based pizza sauce. It takes quite a bit of time for this to bake but it’s definitely worth it! My favorite way to enjoy it is to keep it refrigerated and eaten cold the next day. The breakfast of Chicago champions, I tell you! 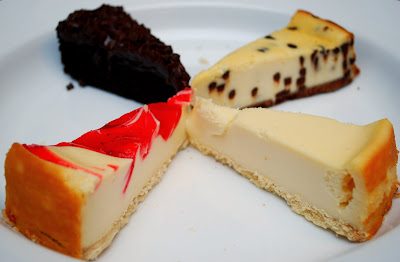 Here in Chicago, we’re spoiled with some great desserts. One of my personal favorites is cheesecake from Eli’s. For my Chicago inspired dinner, I offered a small sampling of some popular flavors and threw in a slice of Eli’s chocolate cake. Each is deliciously rich and rarely disappoints. You can read more about my love of Eli’s and my meeting with Eli’s Cheesecake president, Marc Schulman here! 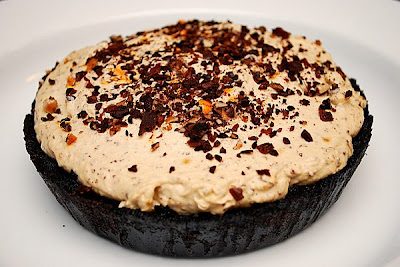 Another dessert I added to our menu comes from First Slice, a great community supported kitchen. First Slice helped the community fight hunger by offering and serving a hot, high-quality three-course meal to approximately 100 men, women, and children in need. The organization is run by Chef Mary Ellen Diaz and this dessert represents not only how Chicago loves it’s food, but how Chicago communities help each other with food.

It was an enjoyable evening with CC, her husband and her daughter, who visited from California. I’m constantly surprised with how the internet brings people together and how friendships can be made… even with readers of my site. This is just a constant reminder of how much I value my readers and I always look forward to meeting readers in person. If you happen to be visiting in my neck of the woods, please let me know – I’d love to share my favorite city in the world with you!
Previous Post: « Green Bean Bredie (Lamb and Green Bean Stew)
Next Post: September Tattle Tasters: Cupcakes! »