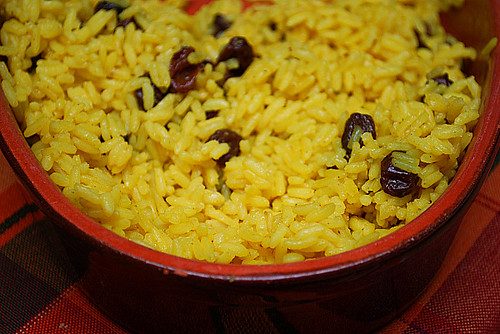 My husband’s favorite saying is, “If there’s no rice, it’s not a complete meal.” He’s quite a funny guy and will come up with a few quips here and there, but his saying rings true, at least for me. We both lived on rice, as did generations before us and without rice in a meal, it would feel like something integral was missing. Rice is also a crop we have a lot of respect for, considering my extended family runs a rice business oversees. It’s their livelihood in so many ways – to them and many others.

And if there is one food I know that’s eaten in almost every cuisine, it’s rice. South Africa is no exception and as a traditional side to Bobotie, a South African meatloaf. The way they prepare rice is to season it with cinnamon, sugar and tumeric, which also adds a beautiful yellow hue. Raisins is also a common ingredient in South African cuisine and when paired with rice, it adds both sweetness and texture. This is definitely a unique and flavorful rice dish that completes a meal, whether it’s South African or not…

In a large pot, bring 6 cups of water to a boil. Add the first 7 ingredients and stir until the sugar has dissolved. Add the rice, cover, and simmer for 20 minutes. Remove cinnamon stick and lemon rind before serving.