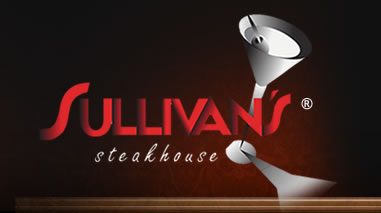 Last week, my husband and I went out on a dinner date and dined at Sullivan’s Steakhouse. We were given the opportunity to check it out, compliments of the restaurant, since we’ve never dined there before and surprisingly, the restaurant is less than half a mile from where we live!

Our dinner started off by having the pleasure of meeting Brad Alaoui, the restaurant’s general manager, and Laura was our server. Although our dinner was compliments of Brad, here’s a breakdown of our meal and experience with our unbiased review..

Appetizer – Calamari
This was an appetizer that my friend had suggested. She raved about the calamari when she dined at Sullivan’s (Baltimore location.) Trusting her judgement, we ordered that. Brad came by our table and shared with us that they use parmesan cheese and a touch of paprika in the batter used for the calamari. My husband *loved* the calamari and even proclaimed that it was some of the best calamari he’s had. As for me, I thought it was okay. I’m not into seafood lately but managed to give some a try. The calamari was accompanied with a dipping sauce which tasted like a mixture of seafood cocktail sauce and perhaps relish? It had a nice tang and bite to it and went well with the calamari. 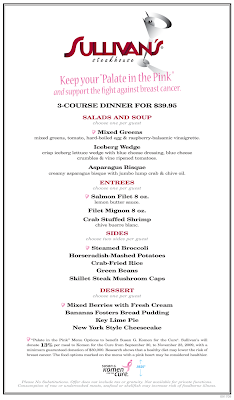 We figured the meal would offer a nice sampling of dishes and support a worthy cause. He ordered:

Asparagus Bisque – We thought the chilled bisque was delicious. It was very refreshing and had a very distinct asparagus flavor. The bisque also had the additional texture from jumbo lump crab which garnished the soup and a few drops of chive oil which gave a nice subtle flavor that paired well.

Salmon Filet – It was a very generous size that was done nicely, if not slightly under done. Part of it was slightly undercooked for his taste but overall it was nicely seasoned and the lemon butter sauce offered some nice bright notes.

Crab Fried Rice – The rice was slightly mushy/moist than we expected and my husband thought some of it was cooked al dente. It was the least liked dish on his plate. I though perhaps the rice was made with some seafood stock – maybe too much – which was why the texture was slightly mushy. There wasn’t much color to the fried rice and if I were to recreate this, I would have added some diced carrots, peas or maybe a melange of diced bell peppers.

Skillet Steak Mushroom Caps – These had a rich flavor and good texture – not too rubbery and nice portion amount. I believe button mushrooms were used and I wonder if using cremini would make this side dish even richer in flavor.

Iceberg Lettuce Wedge w/Blue Cheese Dressing – This was probably one of my favorite salads. My only concern before ordering this was whether the blue cheese was pasteurized. Once I was told it was, I was thrilled and it was a great dressing. I was told it was made in house and had a nice balance of flavor. Even my husband who isn’t a fan of blue cheese really enjoyed the salad. 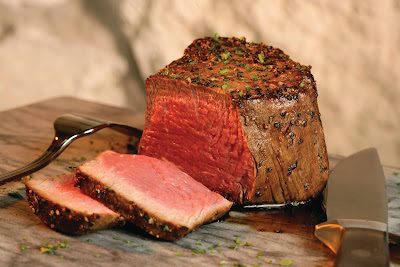 Filet Mignon – I requested the steak to be cooked medium well and it was done nicely. There was a portion that was too pink for my taste but overall, it was succulent and lightly seasoned so that I could taste the quality and true flavor of the steak.

Asparagus & Horseradish Mashed Potatoes – These accompanied my steak and was a nice pairing. The asparagus were crisp and fresh – not overcooked and had still had a bright green color to them. The mashed potatoes were okay, but somewhat too smooth. It made me question whether they were real mashed potatoes. If so, what’s their secret for making them so smooth and creamy?! The potatoes also had a nice hint of horseradish that wasn’t too overpowering. 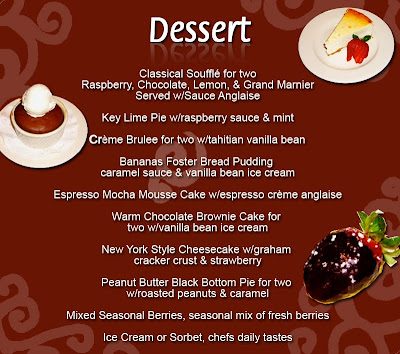 Dessert – We were served a platter for 4 specialty desserts which we enjoyed with Lavazza coffee.

Key Lime Pie – my personal favorite on the plate. Perfectly tart with a nice buttery crust

Espresso Mocha Mousse Cake – My husband’s favorite. The cake was a little dry but the mousse made up for it. Regardless, my husband loved this cake.

NY Style Cheesecake – our least favorite of the desserts. The texture was a little soft for our taste and slightly too “eggy”

Overall it was delightful evening and we enjoyed our meal. We have already shared our experience with some friends as well as informed them of the happy hour specials they offer during the week. I hope to plan a girls night out soon and take them to Sullivan’s so they can try out their specialty martinis.

Sullivan’s Steakhouse has quite a few locations around the country and if you haven’t checked it out, I highly recommend it!