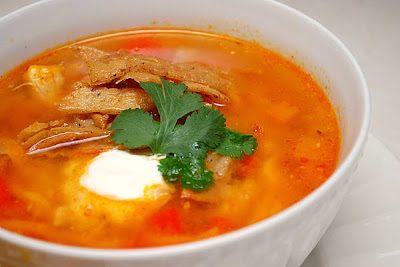 Living in a highrise building downtown has it’s perks. The beautiful views, the convenience of living within walking distance to shops and restaurants, the included amenities we don’t ever seem to use enough, etc. However, one down side is waking up in a cloud. This morning as we looked out the windows, we saw nothing but a grayish haze. It took a couple hours for the haze to dissipate and as I waited, soup seemed like the perfect choice for dinner.

Thinking of the various soups I could make, it was a while since I had a chicken tortilla soup. I did a search through my Cook’s Illustrated online subscription and came across the following recipe. There’s three parts to the recipe – tortilla strips, preparing the chicken and broth and lastly, creating the tomato soup base. It may seem like a lot to do but in actuality, it can be done pretty quickly. Another bonus is that since there are three parts, this recipe is perfect to make in advance and then assemble on the day you want to serve it.

As for flavor, I omitted the use of chipotle in adobo sauce. It’s a bit too spicy for me but to compensate, I added paprika and cayenne pepper for color and flavor. I also added some diced bell pepper to provide some texture as well. To make it a full meal, I served the soup with a buttered corn cobbette and a Mexican loaded baked potato. Overall, it’s a great soup with lots of flavor… and if it means anything, my husband went back for thirds and fourths! 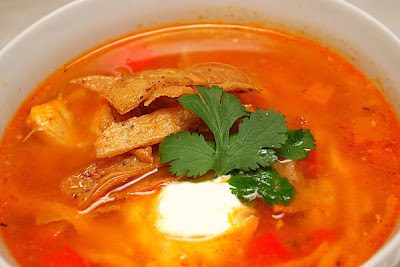 FOR THE CHICKEN & BROTH: In a large pot, bring chicken breasts, broth, 2 onion quarters, garlic cloves, cilantro, oregano and 1/2 teaspoon salt to boil over medium-high heat; reduce heat to low, cover, and simmer until chicken is just cooked through, about 20 minutes. Using tongs, transfer chicken to large plate and allow to cool. Once cool, shred chicken into bite sized pieces and discard bones. Leave the broth in the pot with solids; set aside.

FOR THE TOMATO SOUP BASE: Place the tomatoes, onion, garlic cloves, and jalapeño in food processor until smooth. Heat oil in Dutch oven over high heat until shimmering; add tomato/onion puree, salt, smoked paprika, cayenne pepper and diced bell peppers and cook, stirring frequently, until mixture has darkened in color, about 10 minutes.

Place a large mesh strainer over the Dutch oven and carefully strain the chicken broth into the tomato mixture. Discard any solids caught in the mesh strainer. Bring the soup to boil, then reduce heat to low and simmer to blend flavors, about 15 minutes. Add the shredded chicken and simmer until heated through, about 5 minutes. To serve, place portions of tortilla strips in bottom of individual bowls and ladle soup into bowls; pass garnishes separately. 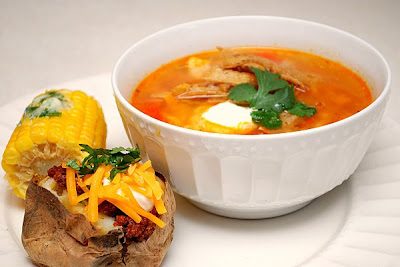