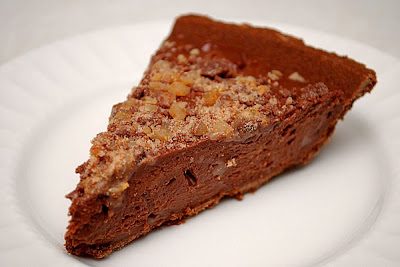 As I’m slowly packing up our stuff for our upcoming move in March, I’ve been forced to acknowledge my bookcase of cookbooks. In our previous apartment, our second bedroom served as my ‘Cook’s Library’ that housed so many of my cookbooks. When we downsized and moved to this 1 bedroom apartment downtown, I was forced to sift through cookbooks and keep only those that I really liked.

One of the cookbooks that made the cut was my Mrs Field’s: Best Cookie Book Ever. I got this book awhile ago because it reminded me of my mall rat days where I hung out at the mall with friends and indulged in Mrs. Field’s cookies. Aside from the nostalgic memories it gave me, it did have some really good recipes. In fact, I made the following recipe.

Last week when I made Dorie’s Low & Lush Chocolate Cheesecake, my husband raved quite a bit about it. Even after we ate it all (and sent our friends home with nearly half the pie), we both still had a craving for something chocolaty and creamy. I found this recipe in by Mrs. Fields that fit the bill… and it also included chocolate covered toffee bits! Score! I had a bag of Health Toffee Bits I purchased early in the fall that I forgot about.

This pie was so smooth, creamy and the best part is the toffee. You see, those little toffee bits tend to melt and soften a bit when folded into the chocolate filling. When you finally have a slice, you’ll notice little creamy pockets of oozy toffee goodness. That alone makes this dessert so good! After slicing and trying a bite, both my husband agreed that a little freshly whipped cream would take this pie over the top… so if you have some on hand, use it!

Make the crust: In a medium bowl, combine the wafer crumbs, butter and sugar. Press the mixture into the bottom and up the sides of a 9-inch pie place. Bake for 10 minutes. Place on a wire rack to cool.

Prepare the filling: Measure the heavy cream in a 2 cup measuring cup. Heat the cream in the microwave for 1 minute until warmed. Remove the cream from the microwave and add the chopped chocolate/chocolate chips to the cream. Let stand, covered for 5 minutes, then stir until cream and chocolate combine and gets smooth.

In a medium bowl, combine the cream cheese, brown sugar and vanilla. Beat with an electric mixer until smooth. Alternatively, you can prepare this in your stand mixer using the paddle attachment.

Gently beat in the chocolate/cream mixture into the bowl until fully incorporated. Fold in a 1/2 cup of the chopped toffee candy into the mixture. Pour this filling into your cooled chocolate crust and sprinkle with the remaining 1/4 cup chopped toffee candy. Chill the pie until firm, about 2 hours or overnight to allow flavors to meld. 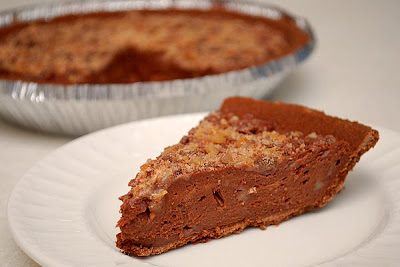