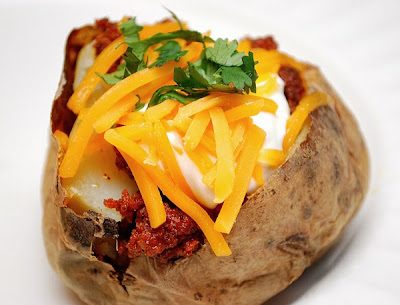 Baked potatoes can be pretty boring. There’s always the usual toppings – butter, sour cream, salt, pepper… maybe even chives. I think they tend to be a forgotten side, not to mention a meal on their own! Tonight I served baked potatoes with Chicken Tortilla Soup, but not just the usual plain baked potatoes. Instead, I loaded them up with Mexican inspired toppings that complimented the soup. I used small potatoes since our soup was a hearty serving but if you wanted, these could serve as a meal in itself with large russet potatoes. Don’t underestimate the lonely baked potato – use your imagination and top them with a slew of toppings, just as you would pizza!

Scrub potatoes well to remove dirt. Place on middle rack of oven, and bake 75 minutes. Remove from oven and pierce with fork to create dotted “X.” Press in at ends of potato to push flesh up and out.

While the potatoes are baking, heat a skillet over medium high heat. Once hot, crumble the soft chorizo and saute until cooked through and crisp.

Top the baked potatoes with chorizo, cilantro, cheese, sour cream (or any additional toppings) and season with salt and pepper to taste.