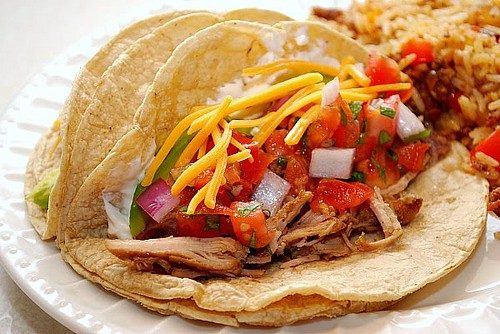 After our recent stay in the ‘burbs where we were bombarded with so much ethnic dishes, our palates needed a rest from Filipino cuisine. To help, I’ve planned some meals this week that will take us around the world to taste the flavors of other countries. We’re starting the week with some Mexican eats and a favorite Mexican dish of ours is carnitas.

Filipinos love their pork. It’s clearly evident in our cuisine and it’s one of my favorite proteins simply because it’s one I ate a lot of growing up. Mexican cuisine uses a fair amount of pork and I love their preparation of carnitas. I’ve made a few carnitas recipes before, one of which was a Rick Bayless recipe that involved deep frying. Looking for a healthier alternative that didn’t sacrifice flavor, I came across the following recipe from my Cook’s Illustrated magazine.

What makes this recipe delicious is the citrus juices that infuses the pork with a lot of flavor. This recipe is a time consuming one that’s sure to test your patience, but definitely worth the wait and effort. Pork butt is seasoned and simmered in a citrus marinade of lime and orange juices. Once heated through, the pork is then left to slowly roast and braise in a low heat oven for 2 hours. The pork is then removed from the pot so that the remaining juices can reduce and thicken. The sauce used to glaze the roasted pork right before it’s placed under the broiler to get some crisp edges and a slight smoky flavor. To complete the meal, I made my Chorizo Mexican Rice. Mmmm… if that doesn’t tempt you to make this, I don’t know what will! 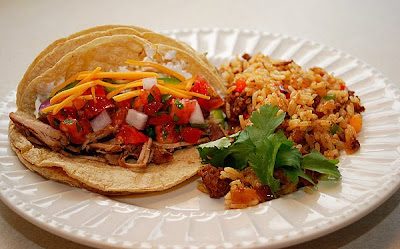 Add all the ingredients in a Dutch oven and heat the ingredients until they begin to simmer, stirring to combine the spices and meat. Cover the pot and place it in the preheated oven. Bake for 1 hour, take a peek and give the pot a stir to turn the meat. Put the lid back on and let it continue to bake in the oven for another hour. A bit of patience is needed, but you’ll definitely be rewarded!

After 2 hours of baking time, remove the pot from oven. Remove the bay leasves, onion and orange rinds from the pot and discard. Place the pork in a bowl and set aside. Place the pot on the stovetop and let the remaining liquid come to a boil. Let it boil until it thickens up and is reduced to about 1 cup.

Turn oven to broil and lower racks to near the bottom of the oven. In the bowl, pull each piece of pork in half using two forks. Pour the reduced liquid over the pork and add salt and pepper to taste. Place the coated pieces of pork on a wireor cooling rack set on a baking sheet. Broil the meat for 5 to 8 minutes on each side until well browned. You can pull the pork further if you want and then serve immediately in warm tortillas. Garnish with salsa, cheese, etc as you’d like.

To make ahead/freezer meal – Place all ingredients in a gallon sized freezer bag, seal and freeze. When ready to prepare, defrost and follow the directions as written above.