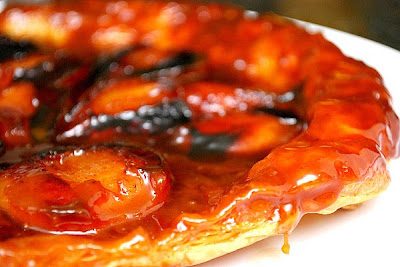 What? Could it be? Yes… I’m back with Tuesdays With Dorie after a three month pregnancy hiatus! I can’t tell you how great it is to be back in the kitchen baking along with the group. This week’s Tuesdays With Dorie baking challenge is Dorie’s Tarte Tartin, chosen by Laurie of Slush (who has the recipe within her blog). I enjoyed making this recipe because it’s a one pan dessert, which makes clean up a breeze.

With only 4 ingredients involved (a sheet of puff pastry, a stick of butter, 3/4 cup of sugar and a few apples or pears), this recipe was a great one to jump back into TWD mode. To start, a sheet of puff pastry is rolled out, docked and cut to fit over my cast iron skillet. Instead of apples called for in the original recipe, I used pears, which I peeled, cored and halved. (Mangoes could also be used.) I melted the butter in my cast iron pan and sprinkled the sugar over it once melted. The pears were placed in the skillet and was allowed to caramelize (which I think I may have slightly over caramelized…) Once the pears caramelized, the puff pastry was draped over the skillet and tucked in. The whole skillet is then baked for 30-40 minutes until golden brown and puffed.

The trickiest part of this whole recipe is getting this glorious caramelized tart onto a serving platter. It takes a large platter (larger than your skillet) and a quick flick of the wrist to overturn the skillet on the platter. Not always the neatest task, but delicious nonetheless! 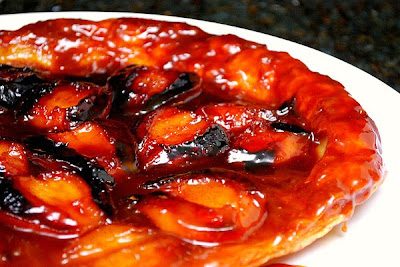 It was an amazing yet easy dessert that’s impressive enough for company. Please check out Laurie’s blog for the detailed recipe and be sure to take a peek at fellow TWD’s to see how their tart came out!