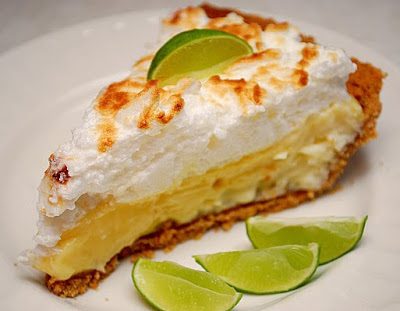 Did you know that today is National Pie Day?! In order to celebrate, I made the following pie. It’s a recipe the Tuesdays With Dorie baking group made a while back which I missed. With the weather being so dreary, this pie brought in some sunshine to my kitchen with the summer flavors of key lime and coconut.

I found this pie to be a kicked up version of a traditional key lime pie. A layer of coconut cream joins a key lime layer which is then topped with a coconut meringue. Interestingly, this pie spends a majority of the time setting up in the freezer so it’s a nice cool and creamy treat. Don’t feel like you have to make this pie during the summer months to enjoy because it’s definitely delicious in the middle of winter!

Put cream and shredded coconut in a small saucepan and bring to a boil over medium-low heat, stirring almost constantly. Continue to cook until reduced by half and slightly thickened. Set aside to cool in a separate bowl.

In the bowl of your stand mixer with the paddle attachment, beat the egg yolks on high until thick and pale. Slowly add in the condensed milk and then half the lime juice on low speed. Add the rest of the lime juice and mix to combine.

Spread the coconut cream into the graham cracker crust (homemade or store bought) and then pour the lime mixture on top.

Bake the pie in the preheated oven for 12 minutes. Remove from oven and cool 15 minutes. Place pie in the freezer to set for at least 1 hour.

After the pie has chilled in the freezer, place the 4 egg whites and sugar in a saucepan and whisk over a medium low heat. Continue to whisk until the whites are hot to the touch. Transfer the egg white mixture to the bowl of your stand mixer with the whisk attachment. Whisk the egg whites until they hold firm peaks. Fold in the last 1/2 cup of shredded coconut.

Remove the pie from the freezer and spread the coconut meringue over the pie. Place the meringue topped pie under the broiler or use a kitchen blow torch to brown the top.

Put the pie back in the freezer for at least 30 minutes to firm up before serving. 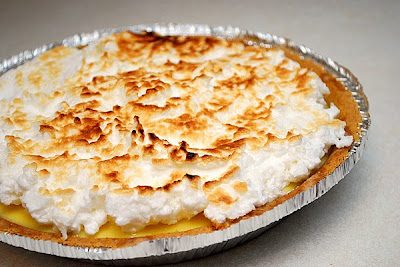